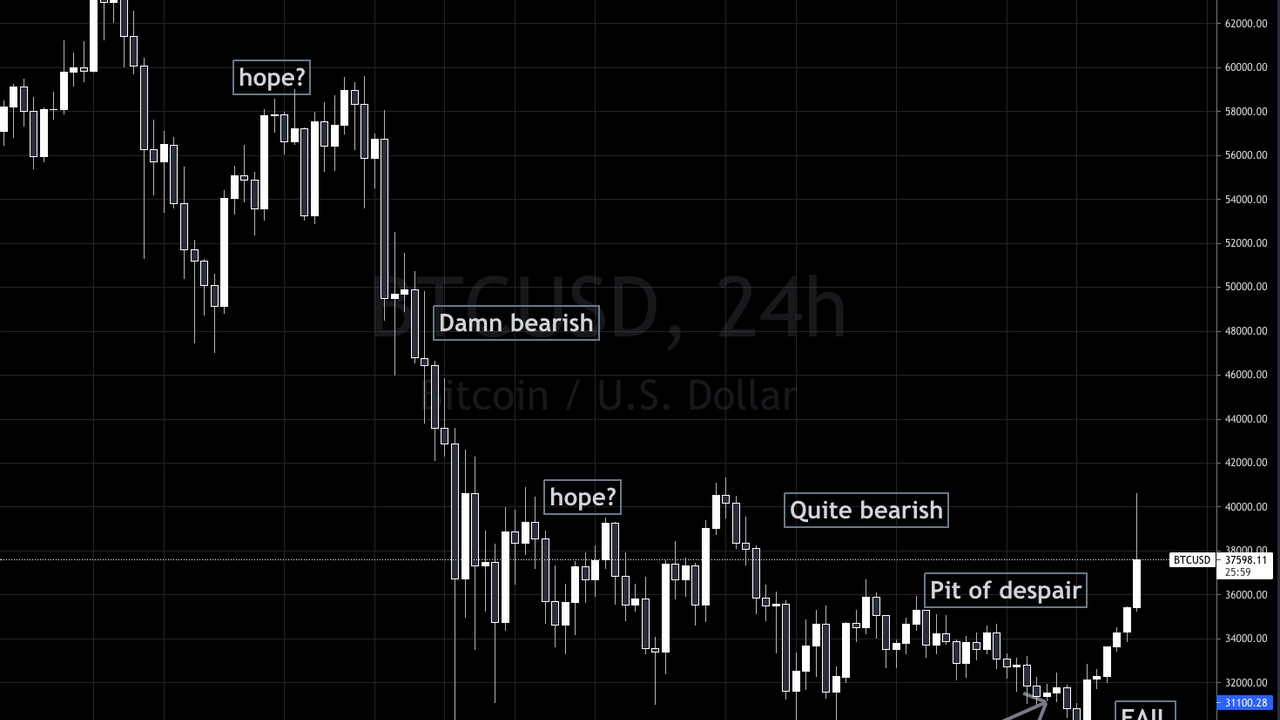 First off, I want to disclose that i'm in the enviable position of being in crypto and Bitcoin since end of 2013 or so. Seeing Bitcoin trading above $1,000 is still pretty incredible, let along above $30k. Heck, less than a year ago it was barely back above $10k.

This perspective gives me a lot less worry than someone who's newer to crypto and maybe bought Bitcoin at $50k or ETH at $2400, so take my analysis as someone who's already done quite well whether it's trading at $30k or $60k.

For me, crypto is a long term strategy, proven time and time again that patience is the best teammate to play with.

Instead of hyperbolic headlines and meme's, my analysis is done the same way I analyze $NQ, Gold, $EURUSD and any other asset I trade.

We got long Bitcoin back in August of 2020 and more importantly we stepped out of the way when our stop losses were hit on May 21 of 2021, leaving all the chaos and carnage to everyone else. Since then we are now long again and expect upwards of $90k for Bitcoin on this next leg up.

Not only that but we absolutely murdered the altcoin rally's earlier this year, up over 1100% this year just on trading alts!

If you want to be part of a team that is completely murdering this market, join us in the Trading Lab. 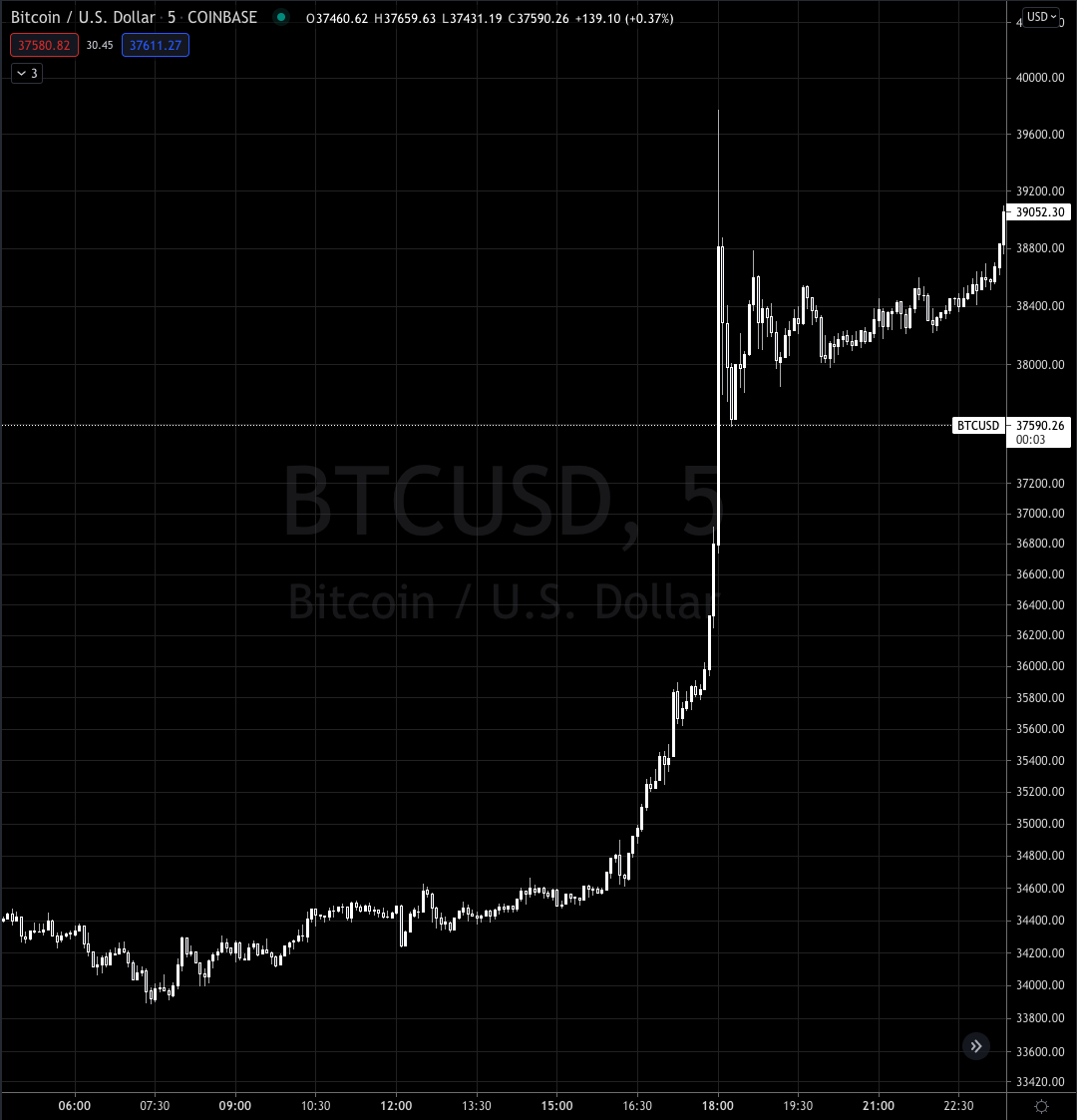 Those watching the on-chain analytics saw $1.1 Billion Dollars in shorts get liquidated and on Binance the price of Bitcoin spiked all the way up to $48k.

The bears getting face ripped, is indeed bullish.

Leverage liquidations punch both ways, it's what caused the 50% drop in May, all those leverage long positions got liquidated all the way down to last weeks $29k bottom.

The bears were out in force since May, capitalizing and getting a bit too confident, which they got to experience the revenge of the liquidation engines on exchanges this past Sunday.

The number one rule of crypto: Never Trade On Leverage

Don't mess that opportunity up by getting liquidated.

I'm no superstar at calling tops or bottoms in markets, sometimes I nail it, but that's just being prepared with a plan to deal with any potential outcomes.

My main tool is to let the market convince me that it is going to do what it wants to do. When a market selloff happens, and the best looking sell setups in the world, fail to sell off, that's the market telling you that it is bullish Then I let it pull me in long and continue to find low risk opportunities to get in, as the underlying market continues to prove itself to me.

Back in April of 2020, the $NQ had already bottomed, but no one really knew that yet. 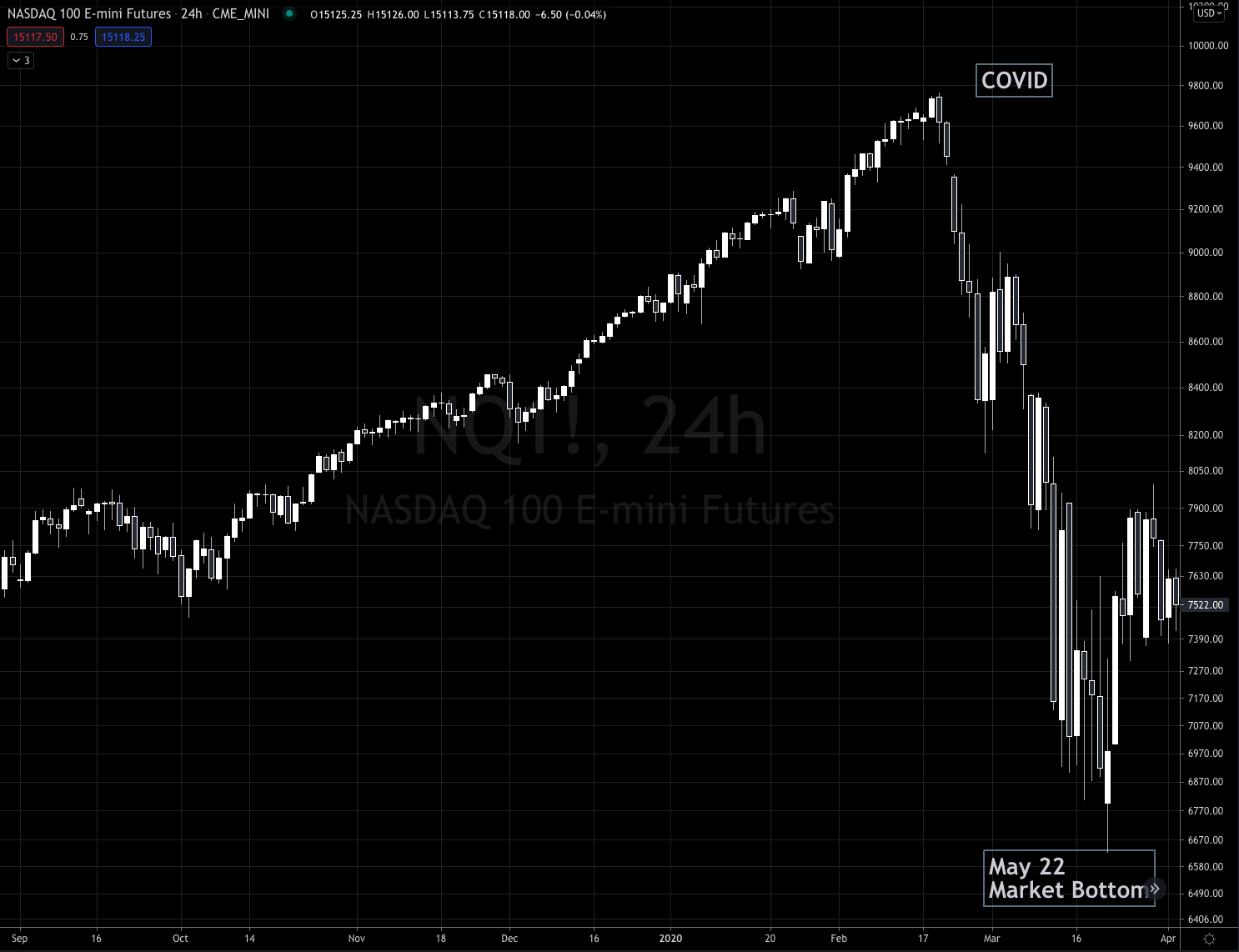 I spent the entire month of March, 2020 in cash, just in awe at the velocity and carnage. I had no trades worth taking, so I just watched.

Then on March 30, after a week of a very strong "Bear Market Rally", the best looking sell setup in the world appeared. 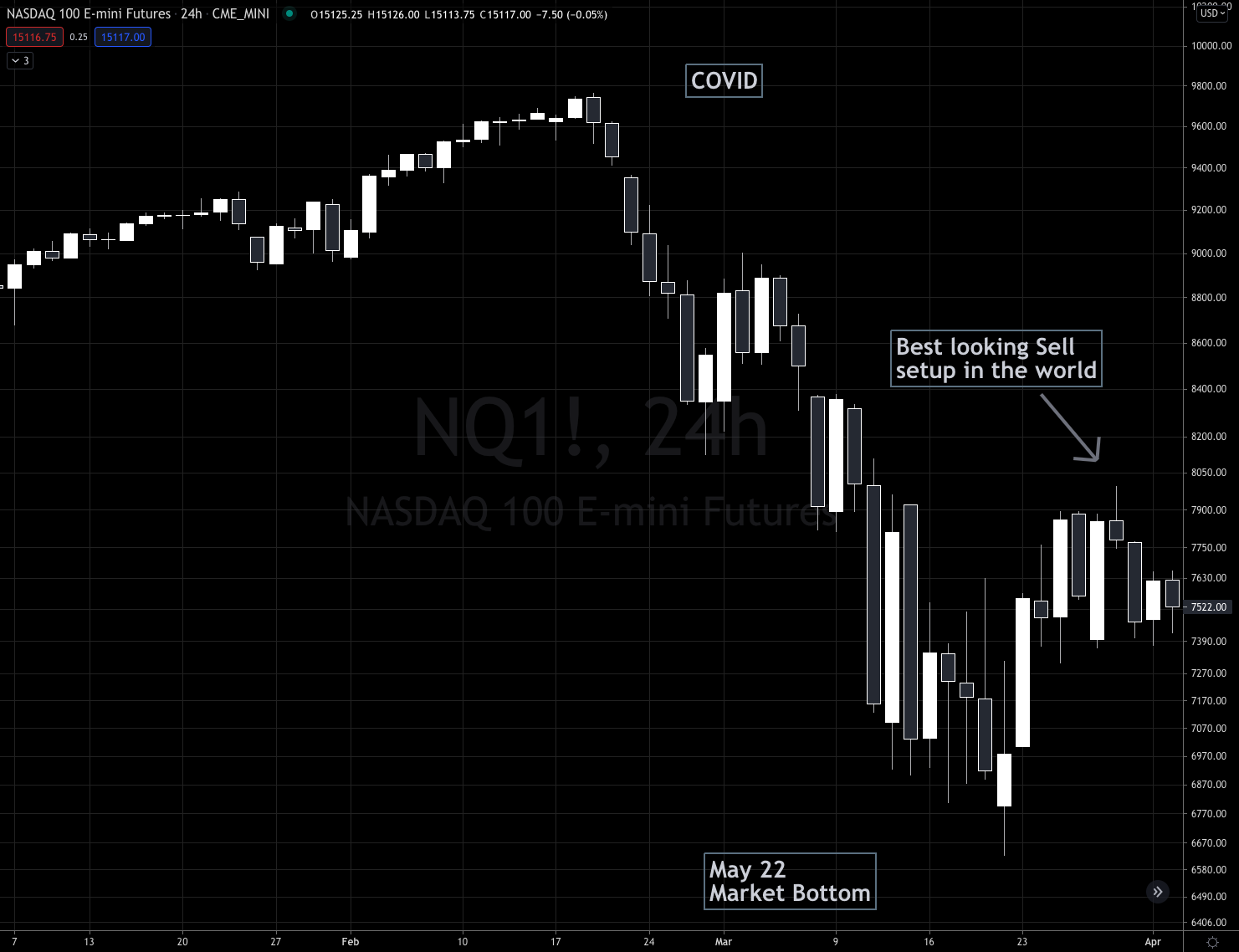 EVERYONE was calling a bear market rally, "The strongest rallies happen in bear markets", "this is just the first leg up in a prolonged bear market", pretty much all the "experts" who lived through the Global Financial Crisis of 2008 were calling for triple digit $NQ, maybe even the end of our financial system as we know it.

But guess what happened, the best sell setup in the world...FAILED! 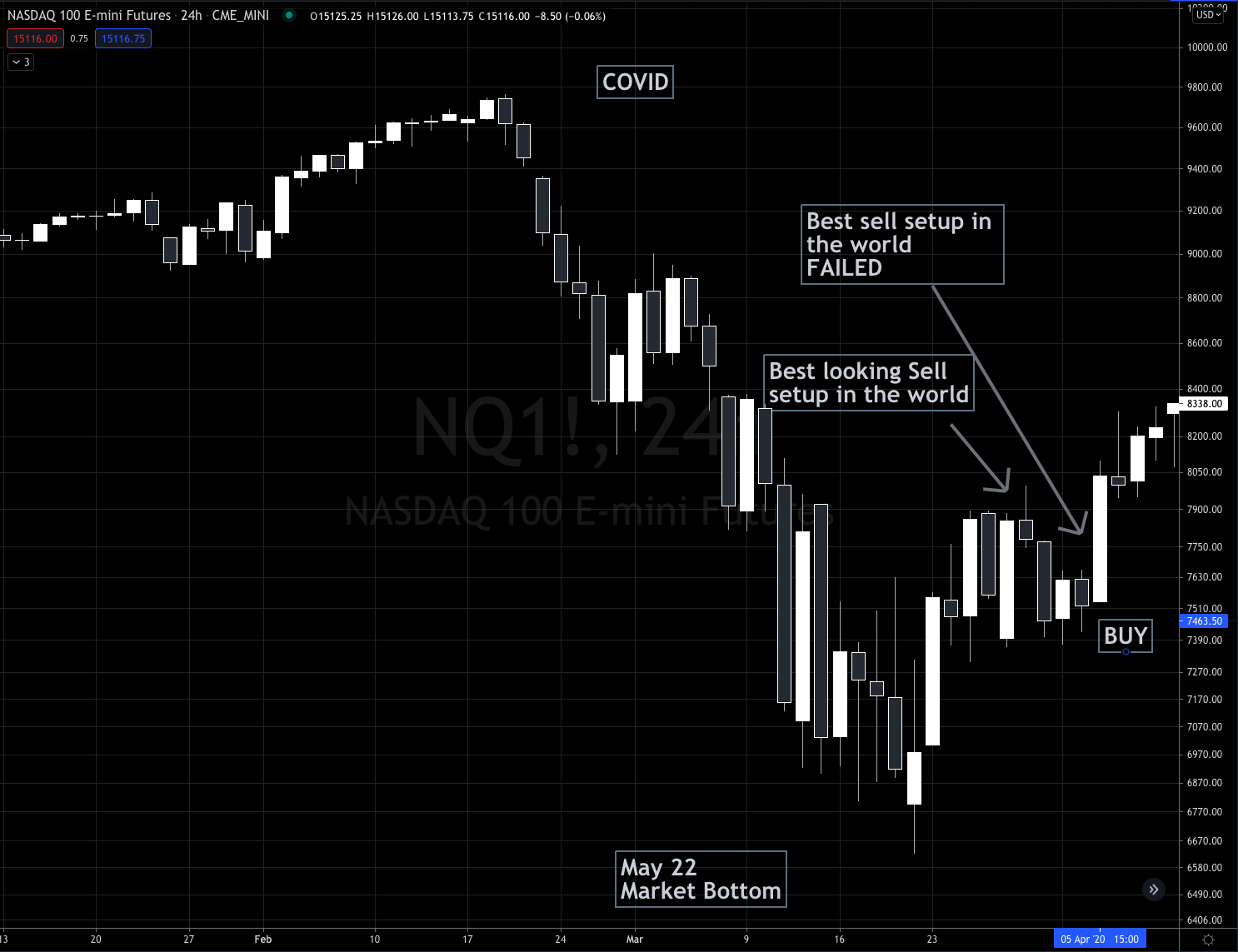 So I put an order that if filled would mean that the best looking sell setup in the world failed, and I'd be long the market.

Then I spent the next six months adding to that trade over and over as all the beariest of the bears kept shorting, getting stopped out and left wondering in utter disbelief why the market wasn't going any lower. 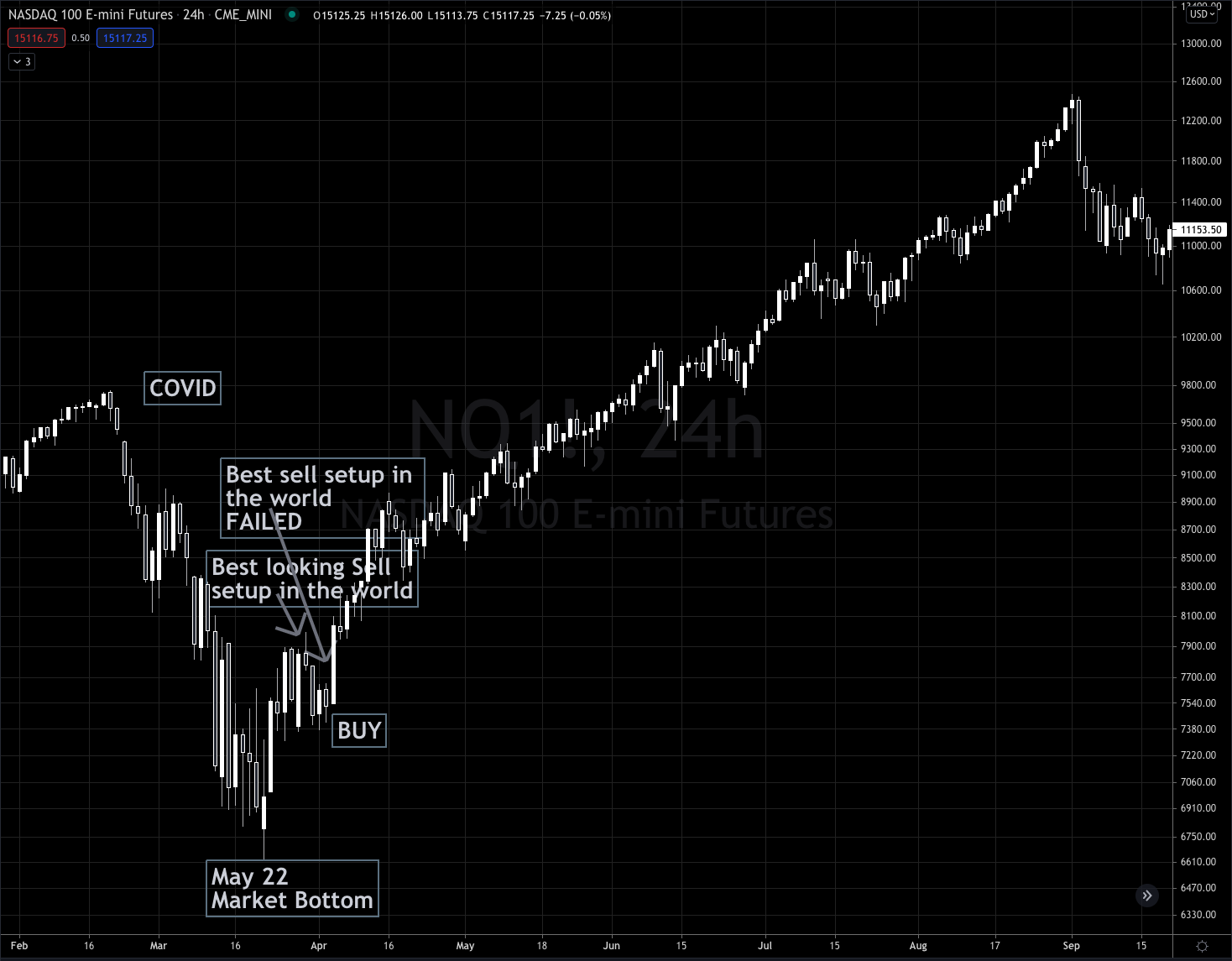 Understanding the underlying incentives of the market you are looking at is extremely important.

Equity indices are incentivized to go higher. They represent the strongest companies in that index, they kick out the weak performers and add in the strong performers. By design, they are built to go higher.

Bitcoin is incentivized to go higher, by design. With limited number of Bitcoins ever created, they are scarce. Not to mention that Bitcoin has already proven itself as a hedge to inflation, corrupt governments and every other network effect feature.

This type of analysis that I do, is most useful on underlying markets that are scarce, and incentives to move higher over time.

It's a really simple concept, that luckily, the perma-bears don't understand that well. Perma-bears are our friends, they provide liquidity and get weak hands scared...all necessary for face ripping rallies, let's not be too harsh on them.

They may sound smart, being cynical with big words and anger towards optimistic folks, but they really aren't doing basic math all that well.

What happens when the best looking sell setup in the world fails? 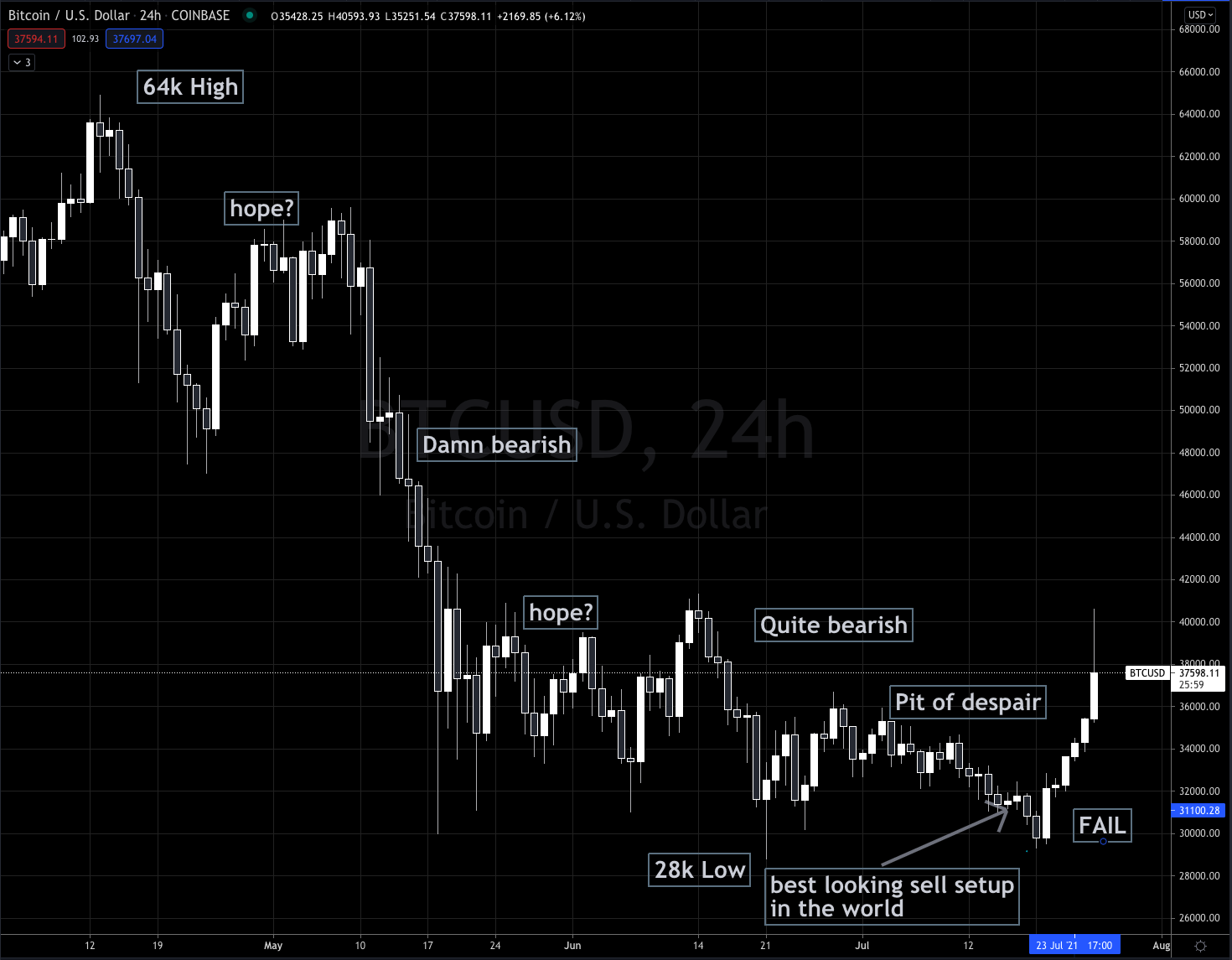 But now the party is coming to an end, they've screamed "last call", the ugly lights are turned on, and now it's time to deal with what's next.

3- This rally fails, and we look for another opportunity when "the best looking sell setup, fails" which would take a lot more weak hands out of their positions, who will eventually fuel a move higher when they forget about Bitcoin and have to chase it higher.

TLDR; I'm bullish and I don't know if it started again last week, or we have a few more weeks to go, but I do expect to see well over $300k by perhaps the end of the year.

My newsletters are FREE. I intend to provide a mountain of valuable information, well above what other newsletter's charge for. Sign Up here

If you are forwarded this email and what to subscribe, do so here.

Help me grow this email list to over 100k people. I want to help as many traders/investors as I can to start focusing on what works in markets and step away from the millions of things that don't.

And if you are ready to work with a bunch of incredibly nice, smart, committed traders who are truly focused on taking control of their future trading join us in the Trading Lab.

My mission is to help people take advantage of a permission-less meritocracy, (that is you don't need permission you just need to be good) by getting traders funded at a prop firm, play the long term game, and meritocratic-ally succeed. Here's our framework to get millions of dollars in capital to trade for a prop firm.

Leave your contact information below, and I’ll reach out to see how we can best connect and start you down the path to consistent profitability.

Take control of your finances with this free 4-step guide.