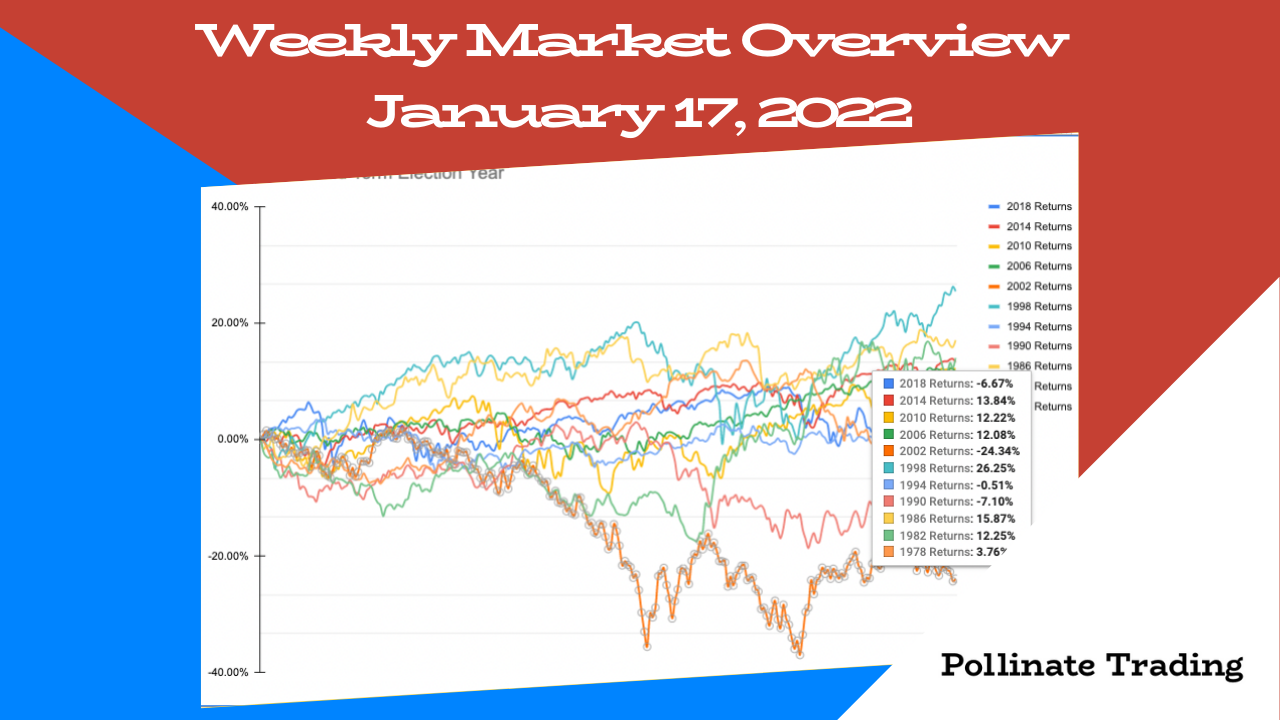 In last weeks newsletter I spent a lot of time talking about the upcoming rise in interest rates and the Federal Reserve tightening its balance sheet. The last time we experienced such an occurrence was in 2018, a year with a lot of turmoil and volatility.

I summarized it in this Tweet, have a read if you missed last weeks overview.

In addition to all the rates rising, balance sheet easing, it was a mid-term election year in the United States. Mid-terms is a reference to the Presidents 4 year term in office, 2 years in, where all of the House of Representatives and many Senators are elected/re-elected.

This year, all 435 seats in the House of Representatives and 34 of the 100 seats in the Senate will be contested. ... This will be the first election affected by the redistricting that will follow the 2020 census.

So a bit of an event.

Historically the Presidents party loses control of Congress, either in the House, the Senate or both.

That is typically a tail wind for the equity markets because now it means that the  Government is in gridlock and nothing more can be inflicted on the markets via government. Market participants are then free to place big positions on the next two years or so.

I gathered daily close data for the $SPX (S&P 500 Index) for mid term election years back to 1978 when President Jimmy Carter was in office. 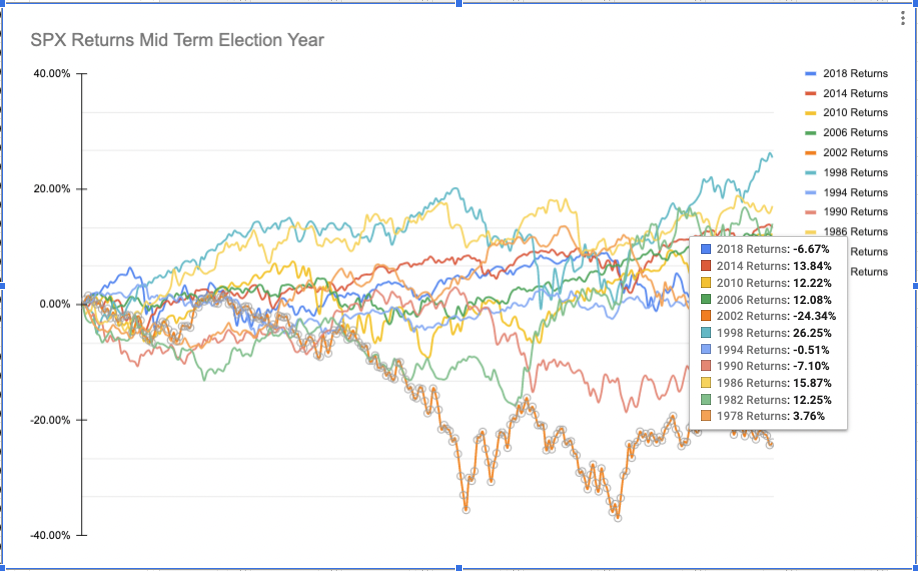 When all eleven mid-term years are combined together a very obvious pattern emerges. 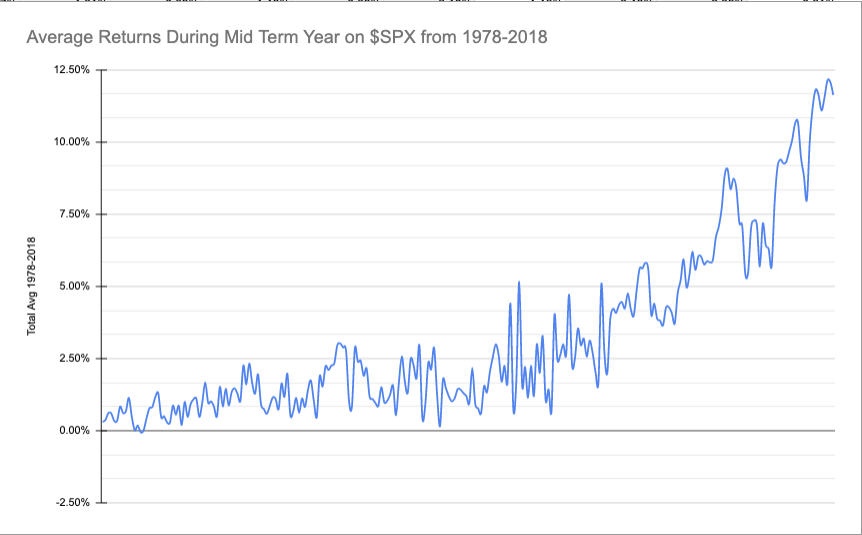 The $SPX trades sideways until November when it takes off to end the year near +12%. That quantitatively suggests that unless we are in a recession like in 2002 or 1990, we should close positive on the year.

2018 then was an outlier year because the US Economy was not in a recession.

The world is a completely different place than it was back in 2018, and we only have one instance of an example, but 2022 does have a lot of the same headwinds as 2018. 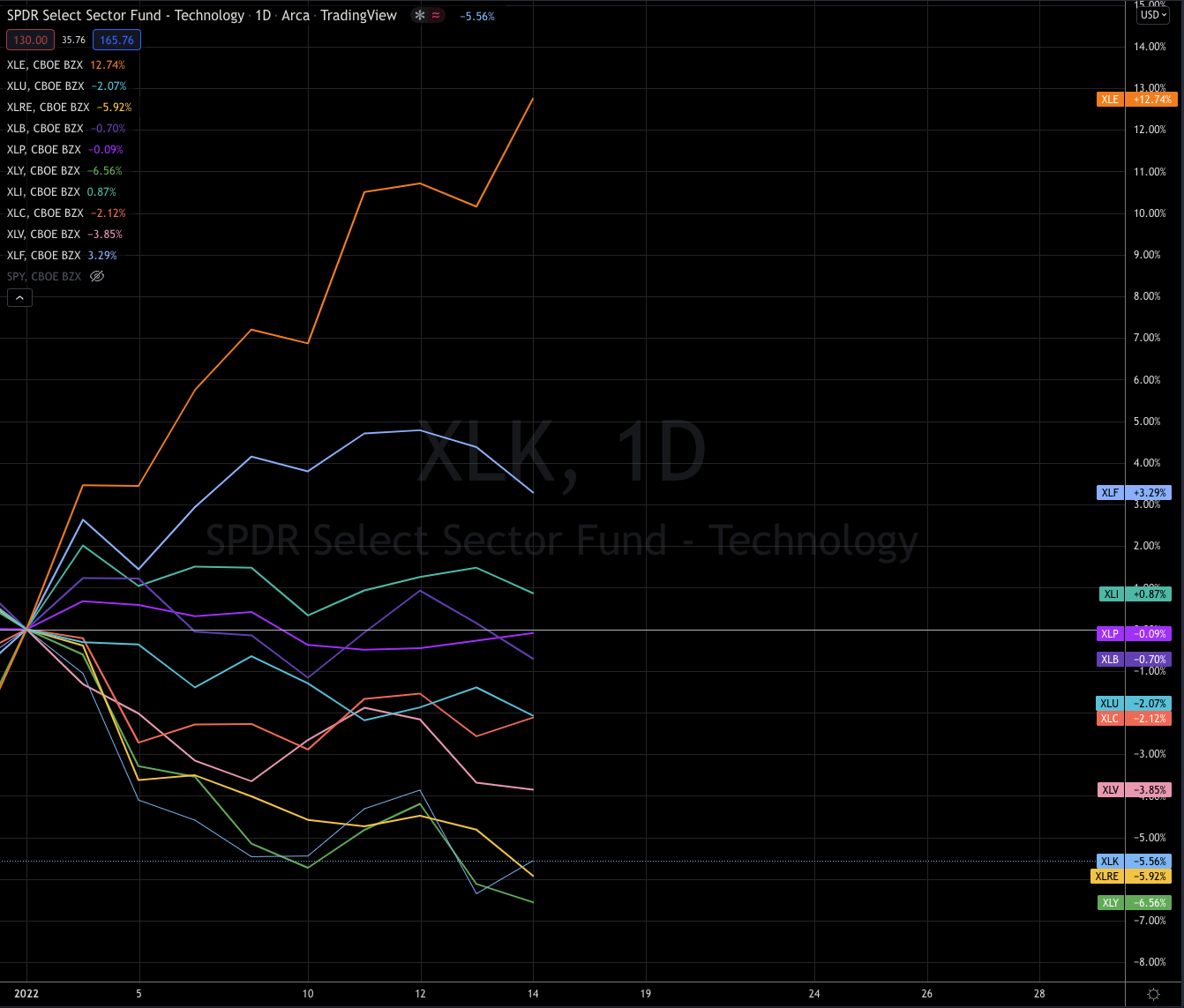 In the Trading Lab, our best position this past week was also in the energy sector, we got long $HAL (Haliburton) at $26.59 and currently it's trading at $28.73 up about 2 bucks.

The Swing Beast strategy continues to pay for itself week after week. With these $HAL we got long DOTM options that are currently up over 180% in value since Tuesday. 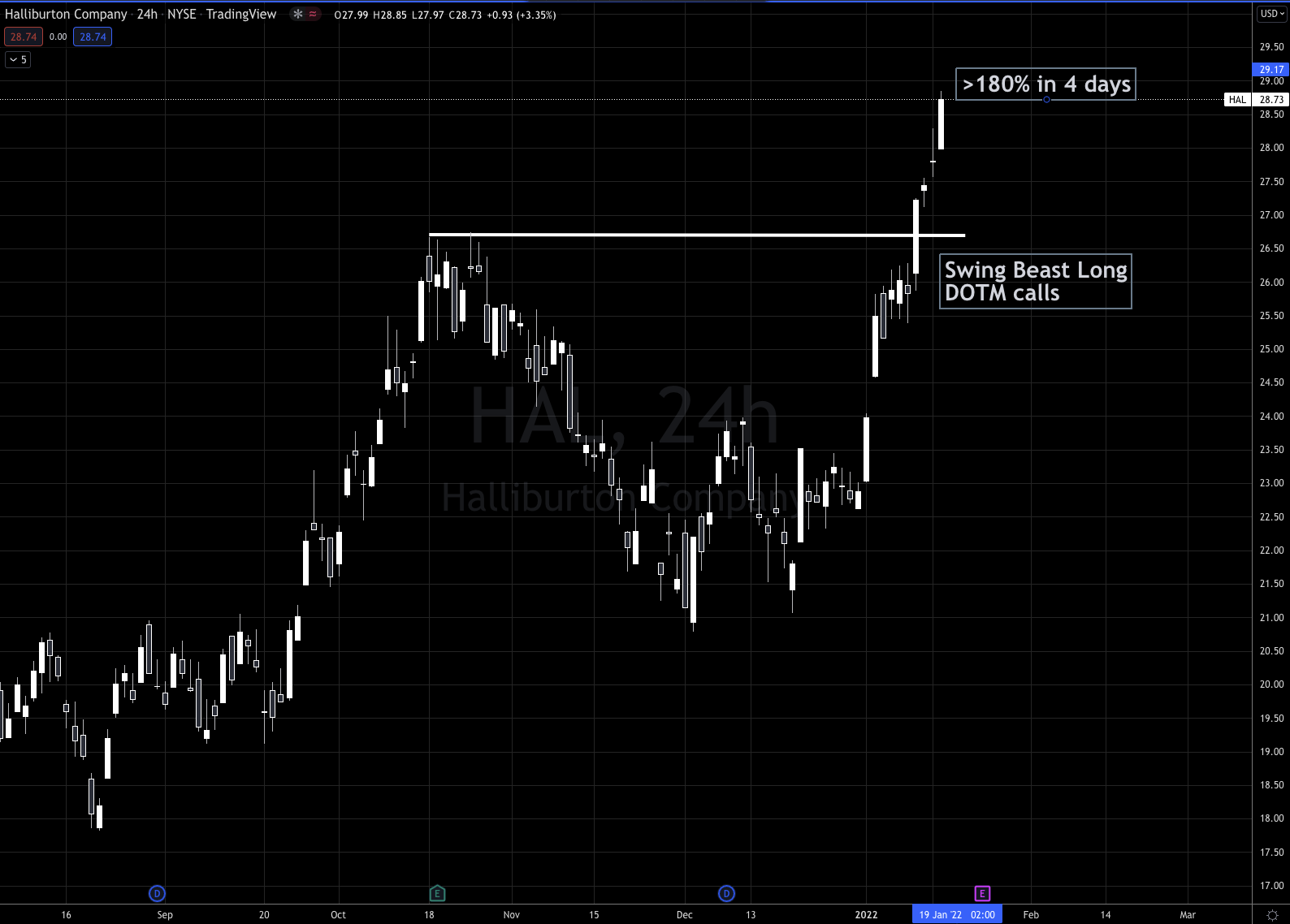 If you want to know more about how you can get this strategy click the link below.

West Texas Crude ($CL) has continued its powerful surge higher, from the incredible price of -$40 (yes negative 40 dollars per barrel) one day in April 2020 to its current price above $83 per barrel. 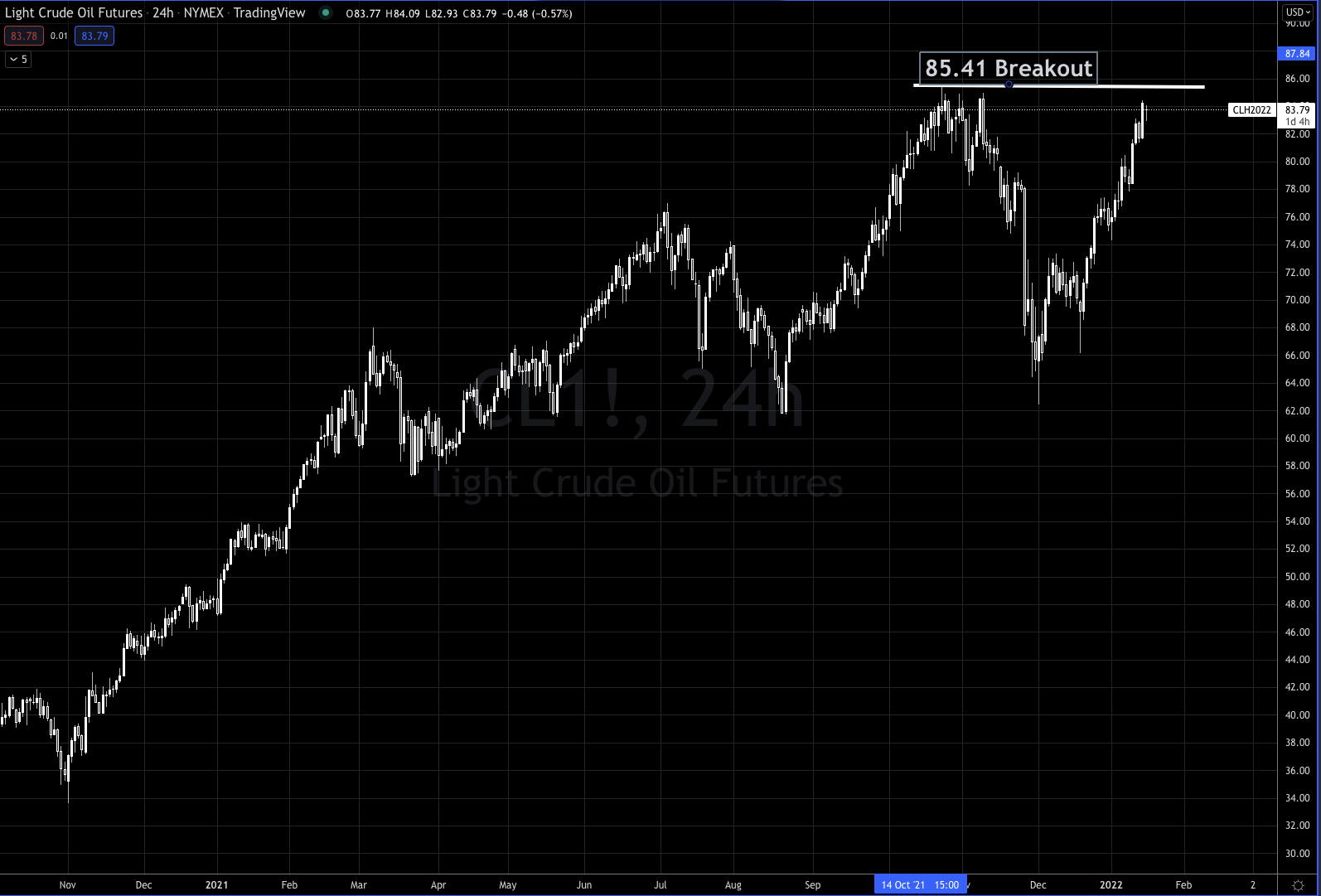 Getting above the $85.41 price level on Crude would be a breakout with a measured move target up over $100 to around the $108 per barrel level, which we haven't seen since 2014. 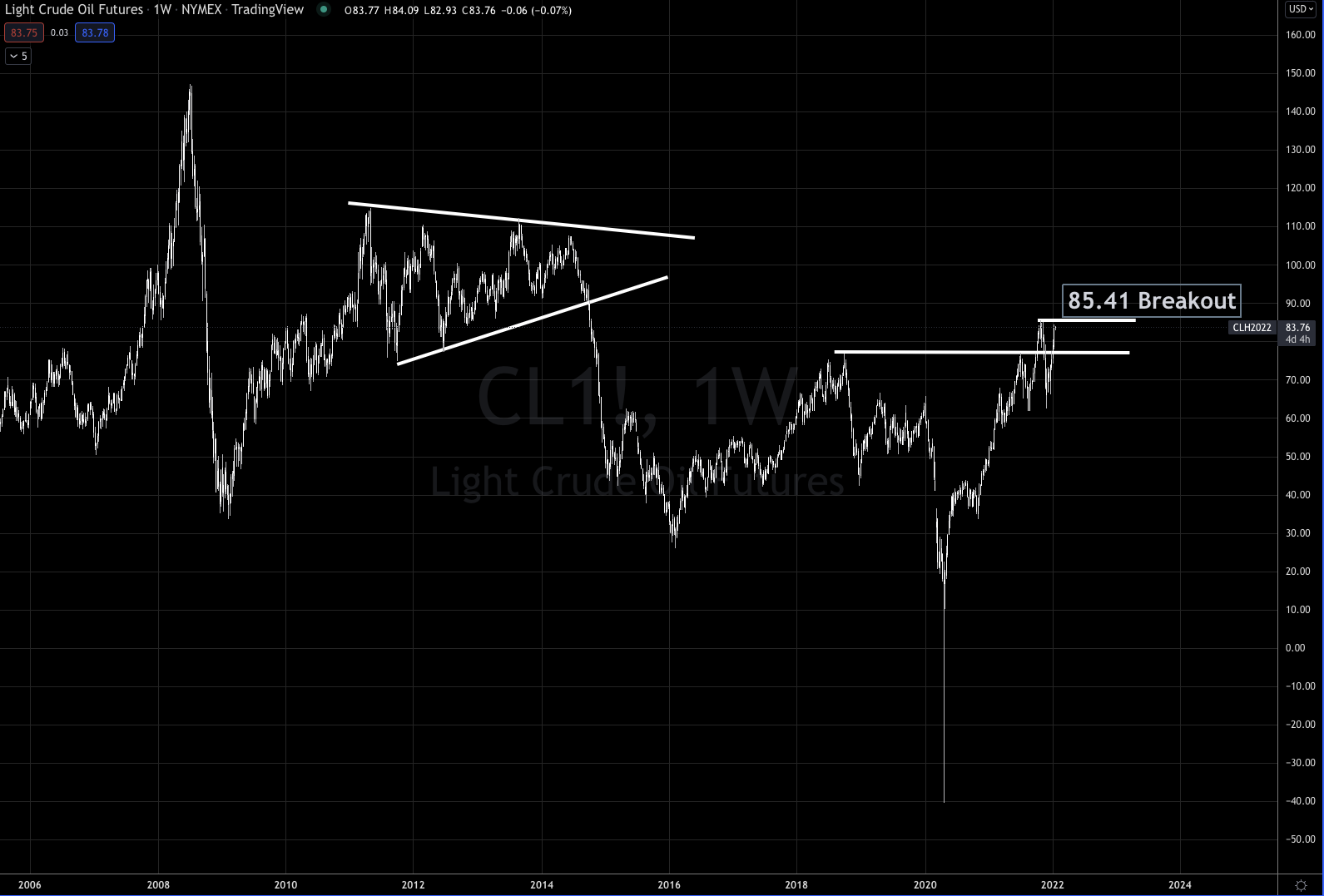 Energy continues to be a major topic, and in a surprising twist, the United States is now the world's top exporter of Liquid Natural Gas. 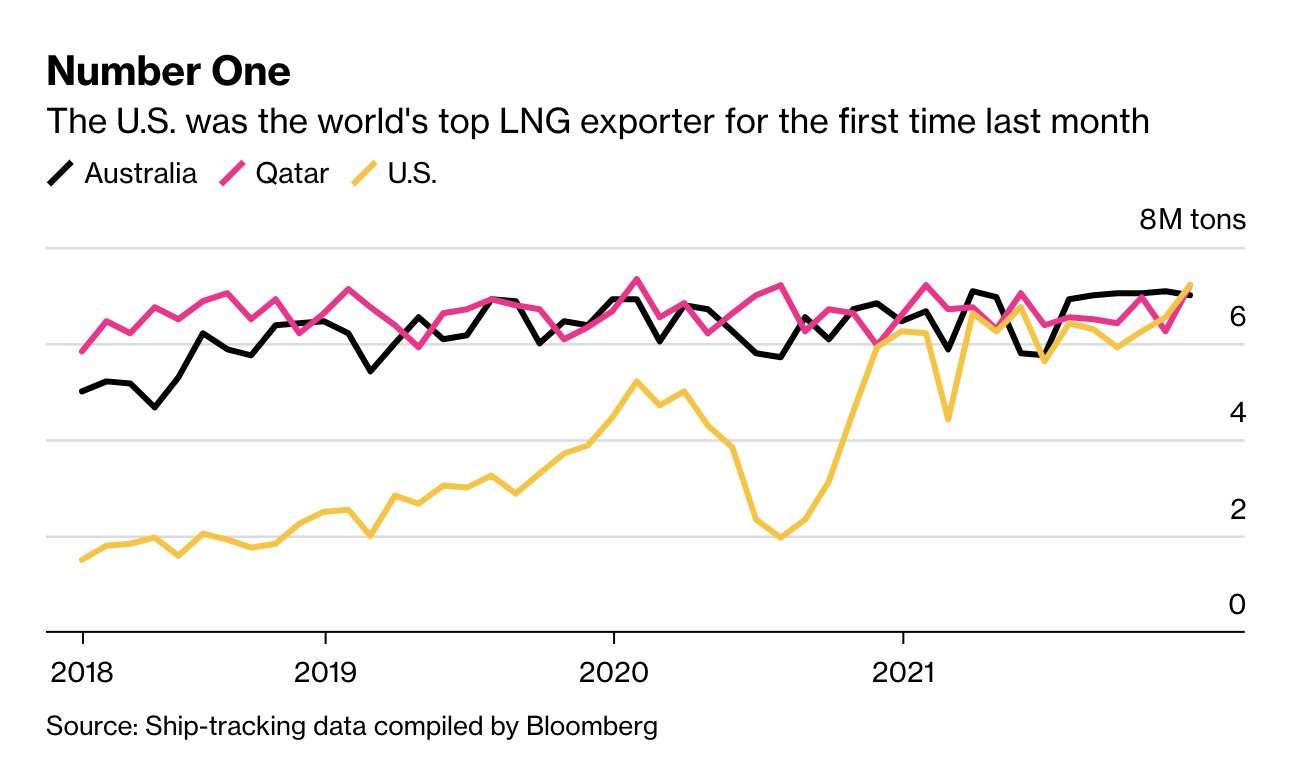 This is interesting as price for Dutch Natural Gas started 2021 trading at around $20 before finishing out the year at a high of $176 in December. 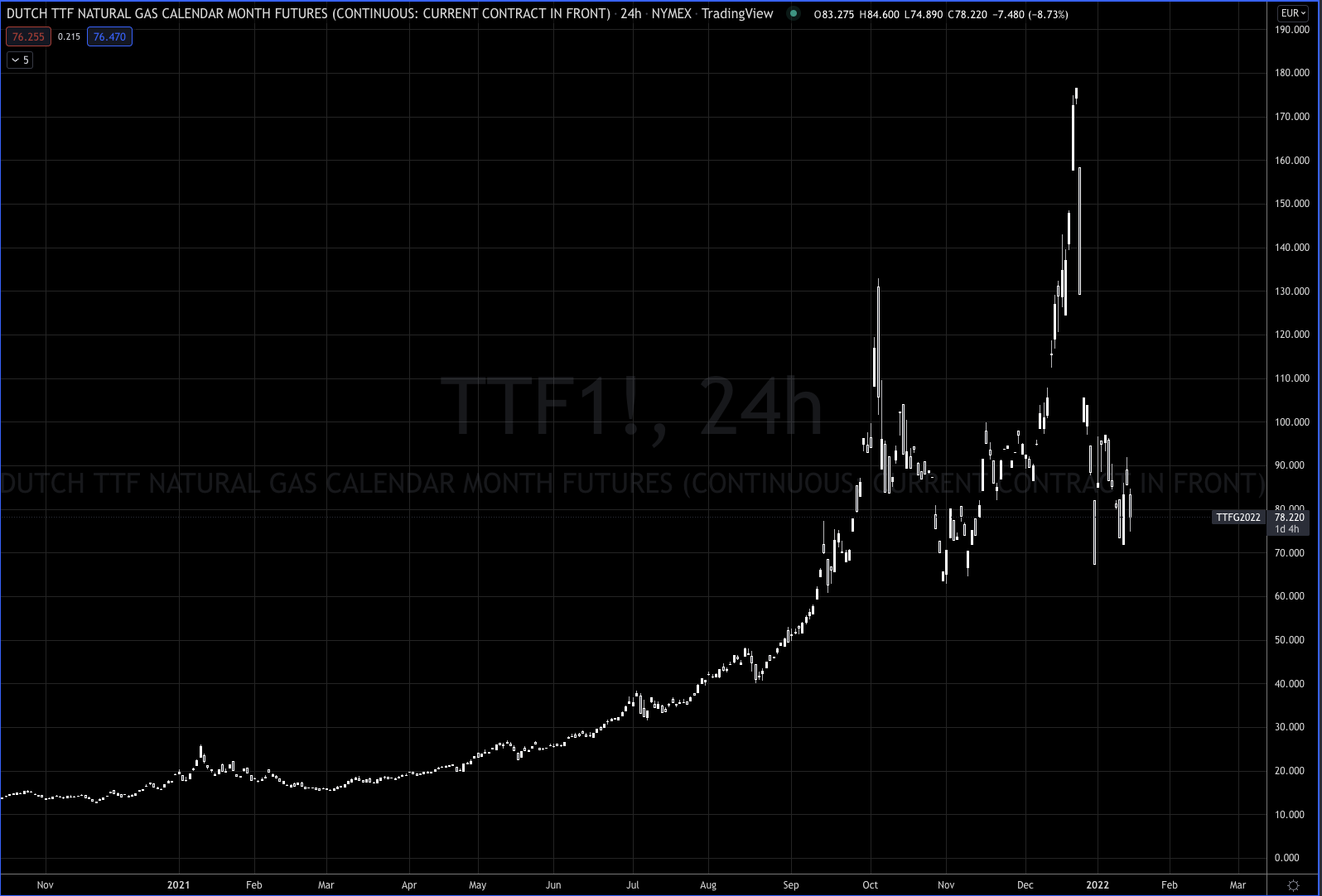 My long term thoughts on Henry Hub Natty (The US contract) are that we won't see prices this low for a long time to come, if ever again, and I'm expecting a move into the 30's from a current level of just slightly above $4. 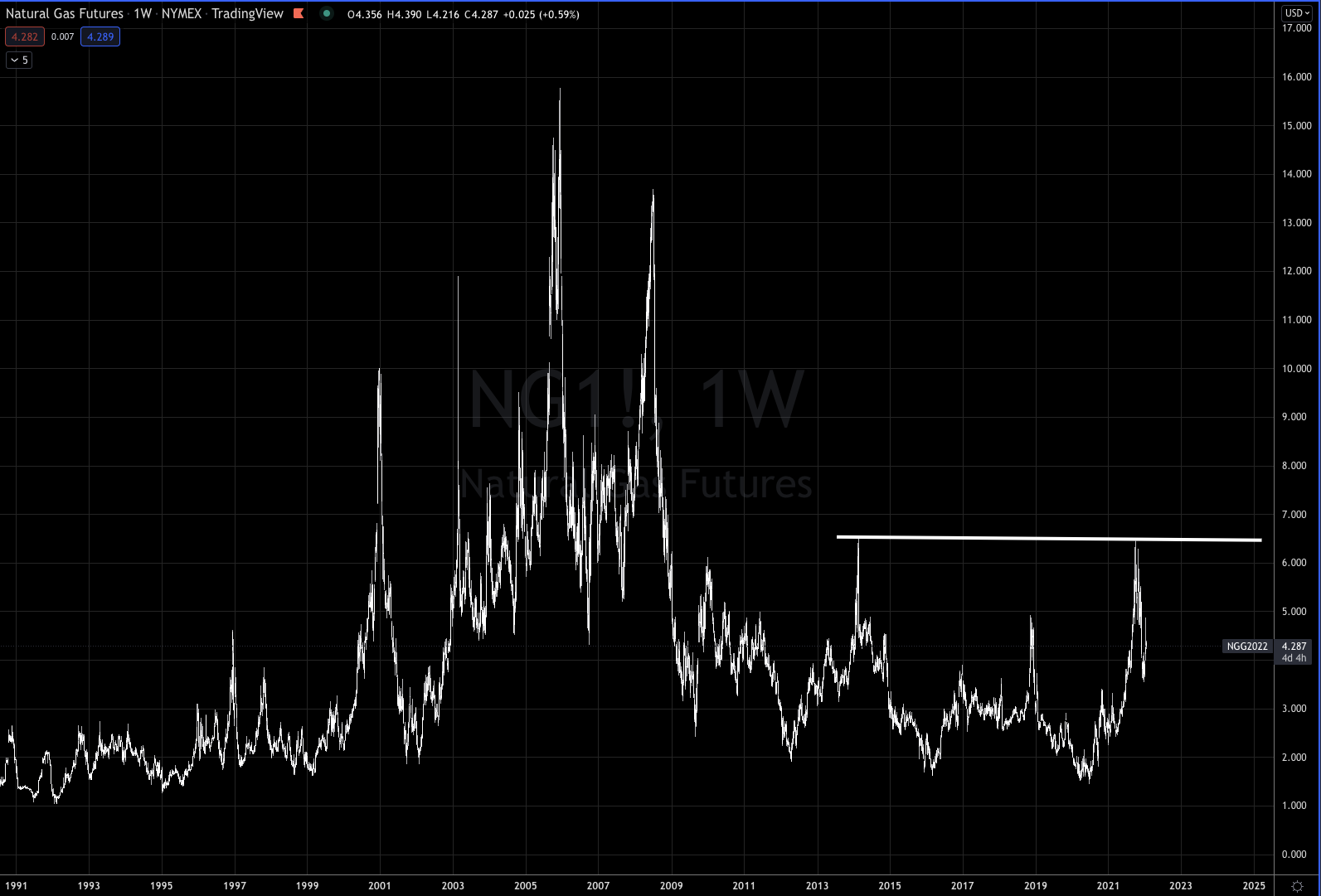 With all the concerns of Russia invading Ukraine, the potential shock of the invasion to Natural Gas prices from the 3rd largest producers (Russia) via sanctions or more participants taking interest in the war (WWIII?) or at least concerns of it, could rattle these markets.

It seems that the Russian invasion is a given by many folks already, it is likely priced in to the cost of Crude or Natty, but if something more (or less) dramatic than expected happens, this is where the risk to rapid price changes will occur.

Energy is going to be a party this year!

The currency markets (Forex or FX) are back after a fairly lackluster 2021, which had many traders questioning their abilities. 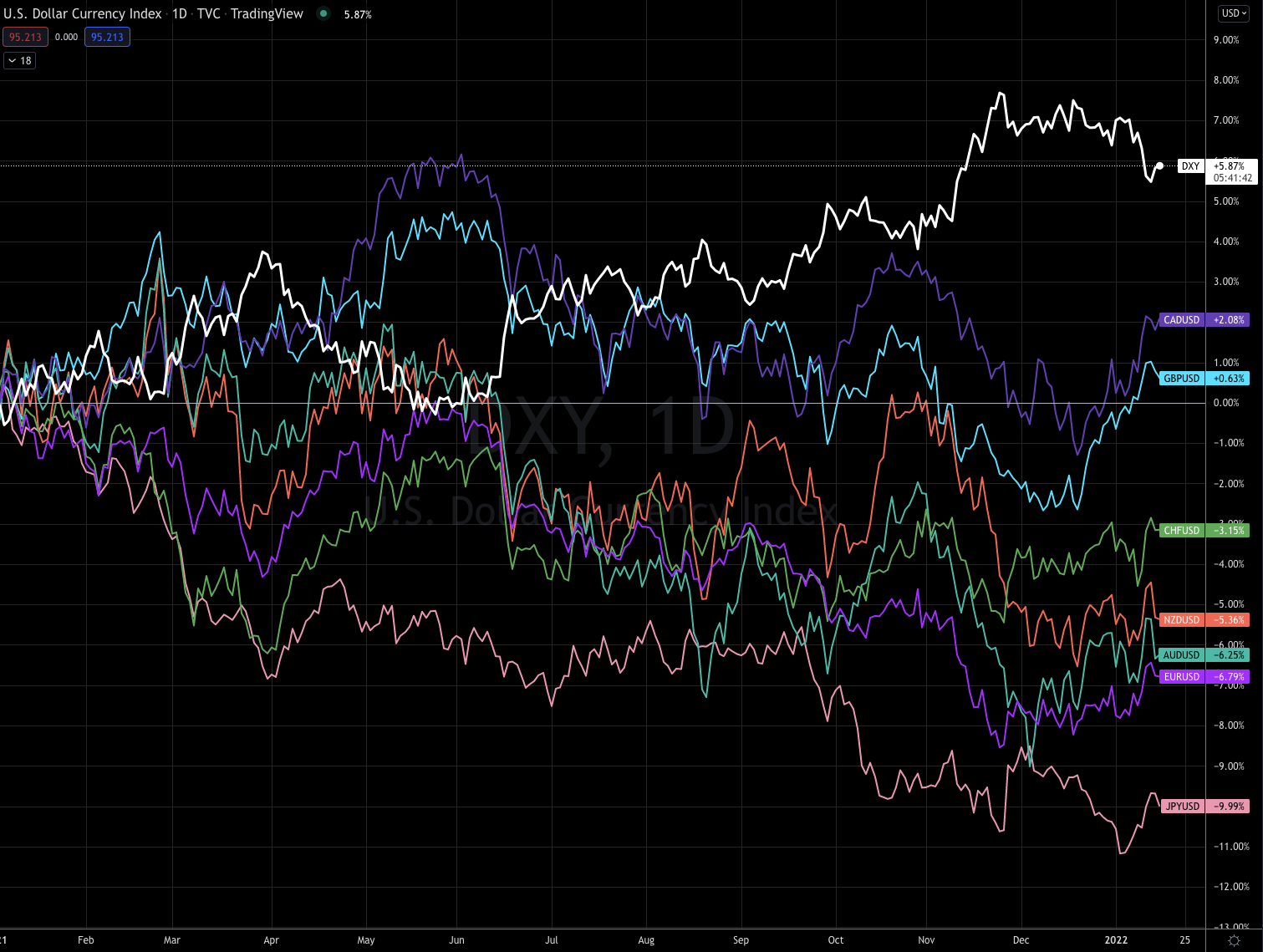 We've been heavily focused on the British Pound $GBP currency for the past two years, with our expectations of $1.50 to $1.70 $GBPUSD 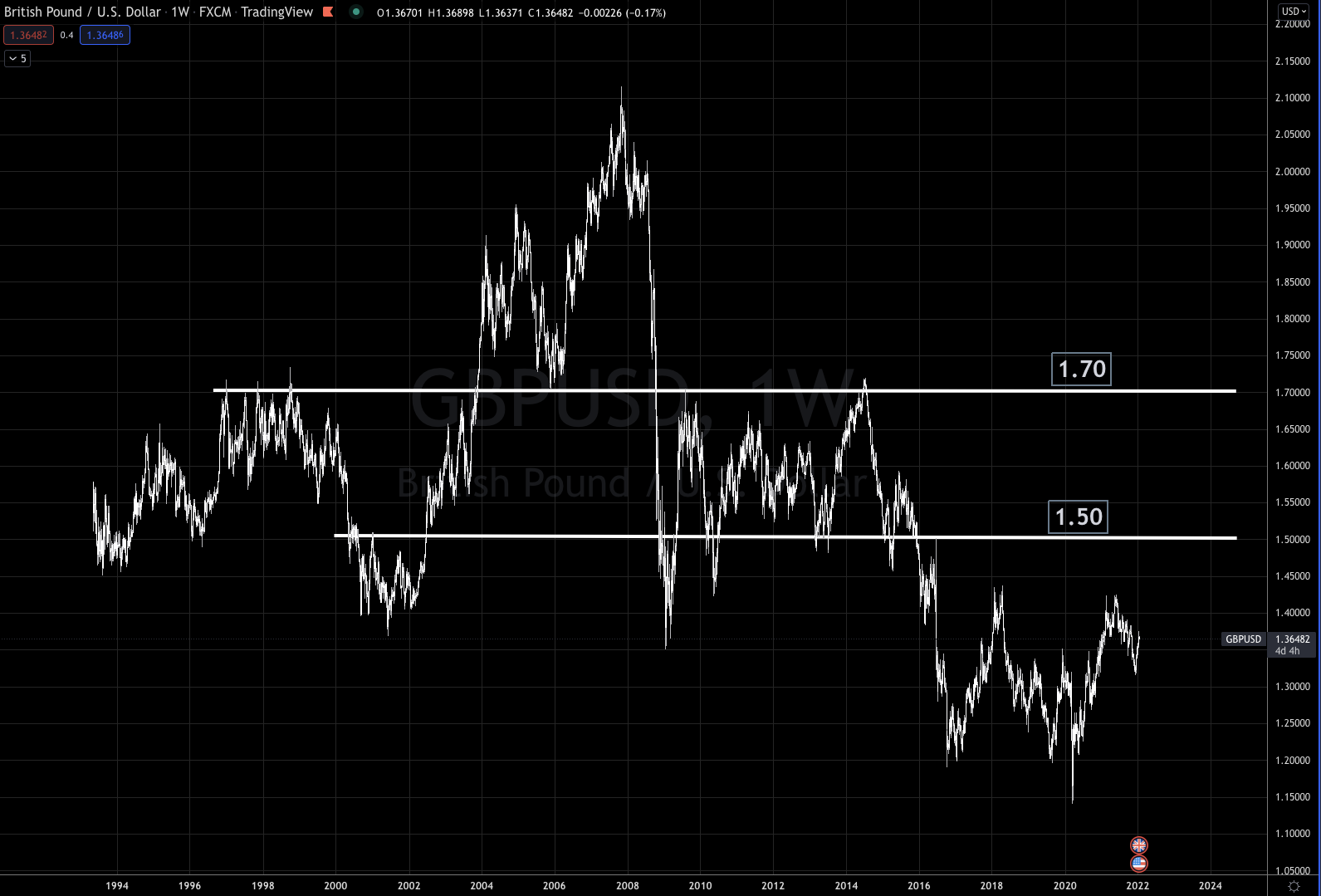 And the always interesting $USDJPY pair has moved above its 30+ year downward trend line. Simply trading above that trend line doesn't mean anything, since it has done so in the past, 2015 for example, but it's something I will be keeping an eye on. 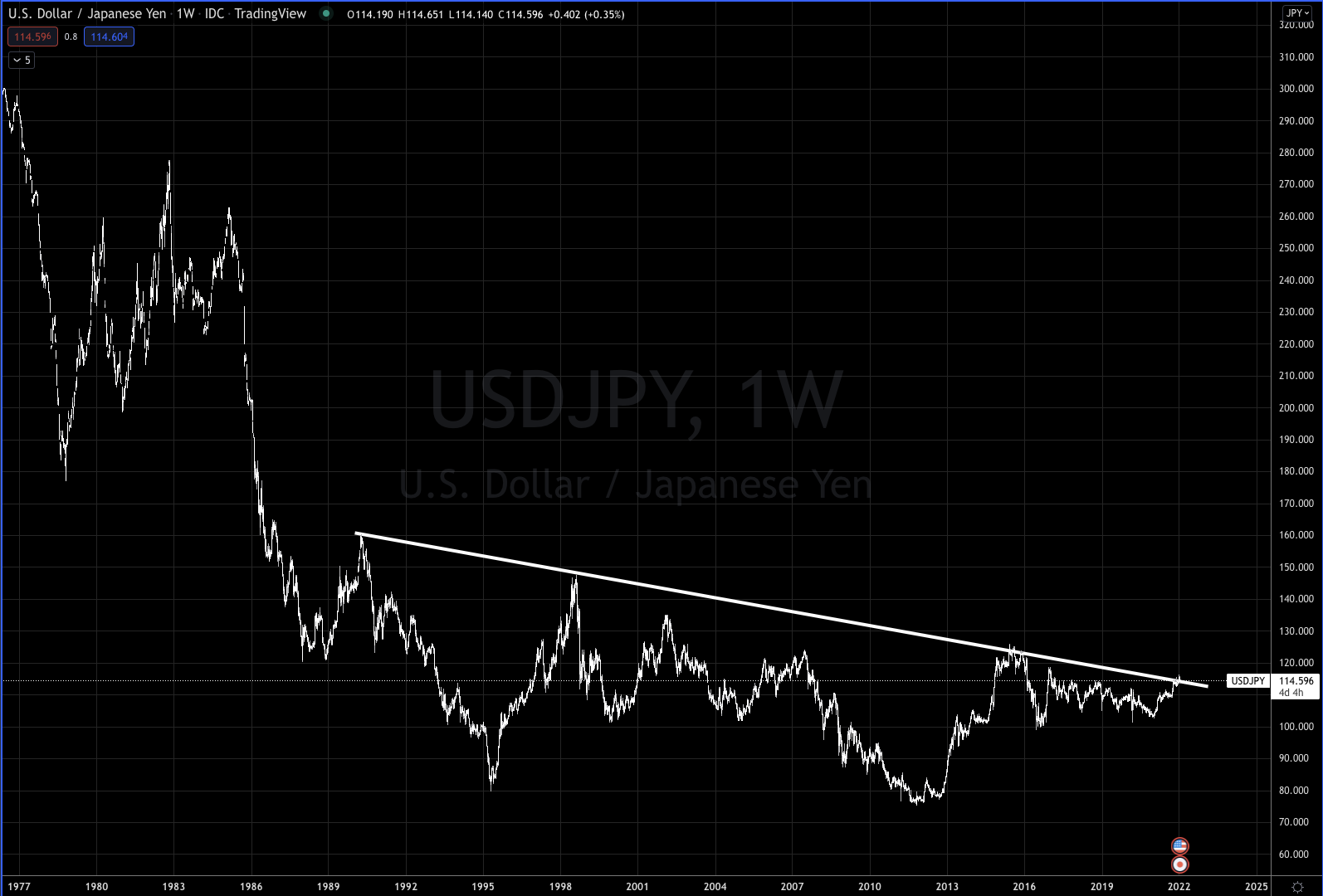 Oh what happened in 2015? Well it was was one of the most volatile year on record for the FX markets, with the unpegging of the Swiss Franc and also right near the last time Crude traded above 100.

In closing, markets are started to become a lot more volatile and have a number of high risk influences from rate hikes, balance sheet easing, war in Ukraine, also Russia deploying troops to Kazakhstan (key to their space program), energy prices skyrocketing, China cutting rates (While the US is raising???) and Omicron having its say. 2022 seems like it's up to the challenge of "Hey 2020, hold my beer!" 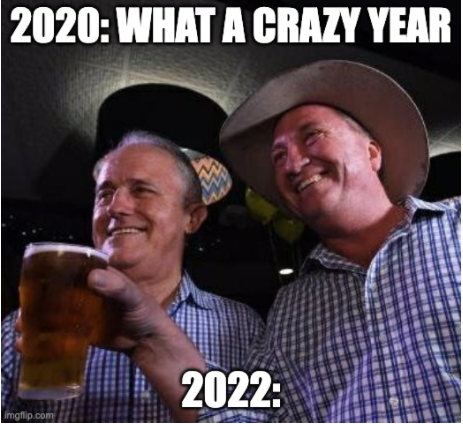 In closing (again!) I have been working way down the crypto rabbit holes lately and will be sharing some of my findings.

The most exciting things that I'm deep diving into right now are GameFi, Layer 1's and Layer 2's, DeFi 2.0, DAO's and watching Crypto become more accepted as a technology. Crypto is currently like the 1990's version of the internet or 2007 before the iPhone changed mobile.

The amount of wealth that is going to be generated will be unprecedented and that's taking in to account the industrial revolution and the technology revolution as precedents.