For the past few weeks I've been talking about being at a very dicey place in markets.

Starting with the end of August warning that we were in for some rocky roads ahead, we took some profits from that long $NQ position and hedged the remainder of the position. And just when it looked as though we had sufficiently sold off and consolidated we got a nice buy type of setup on Monday with follow through on Tuesday of this week. 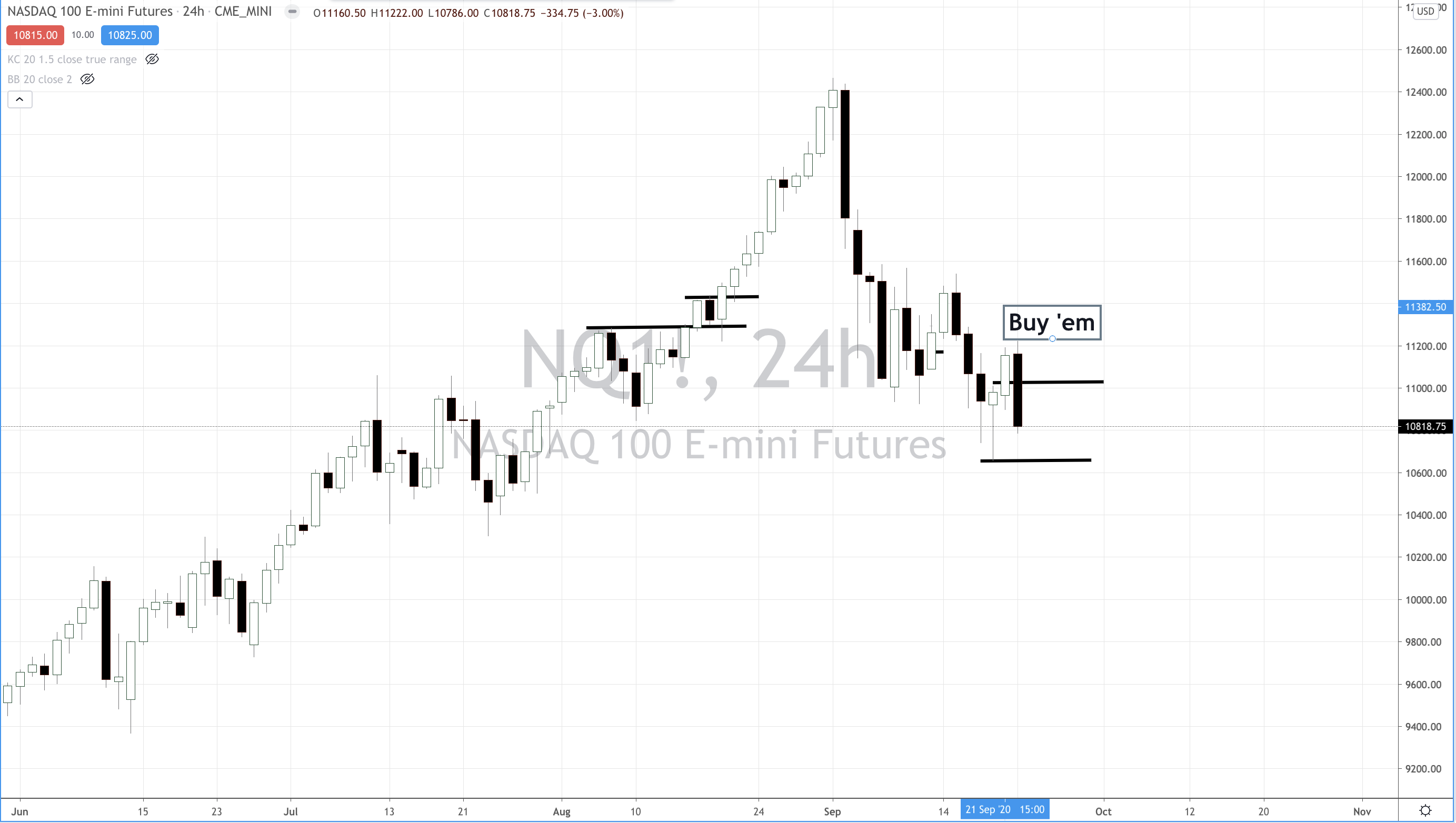 Since I am sitting on a lot of dry powder I got long Tuesday as the reversal continued with pretty good strength.

One of my core trading philosophies is to identify the regime that the market is trading in and not to get caught up in what regime the news cycle and FinTwit is trading in.

After major run ups like we've had since the March/April lows which was relentless buying pressure this sideways action is perfectly normal and welcome. At the same time, when things run hot in one direction it can trigger some over leveraging by participants to keep up.

As we look for a bit of market consolidation I'm on the lookout for signs that the market regime has flipped back to a directionally favored regime, such as the Bull Quiet regime where we can be long for any reason. We got just that on Monday and Tuesday of this week, all signs pointed to a rising market as the best outcome.

Then all different brokers sent emails out to users last night stating that they would be increasing margin limits as we get closer to the elections.

h/t to Trading Lab member @mukesh for pointing this out 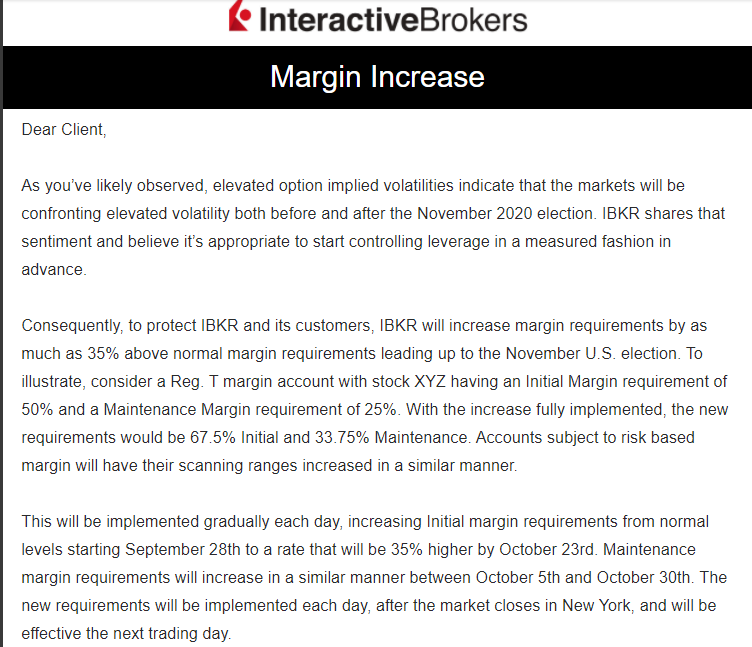 I'm not going to give this a 1:1 correlation to todays selloff, but it does limit the ability for the momentum traders to really bring a parabolic rise to markets, leaving a little less buying power in the markets 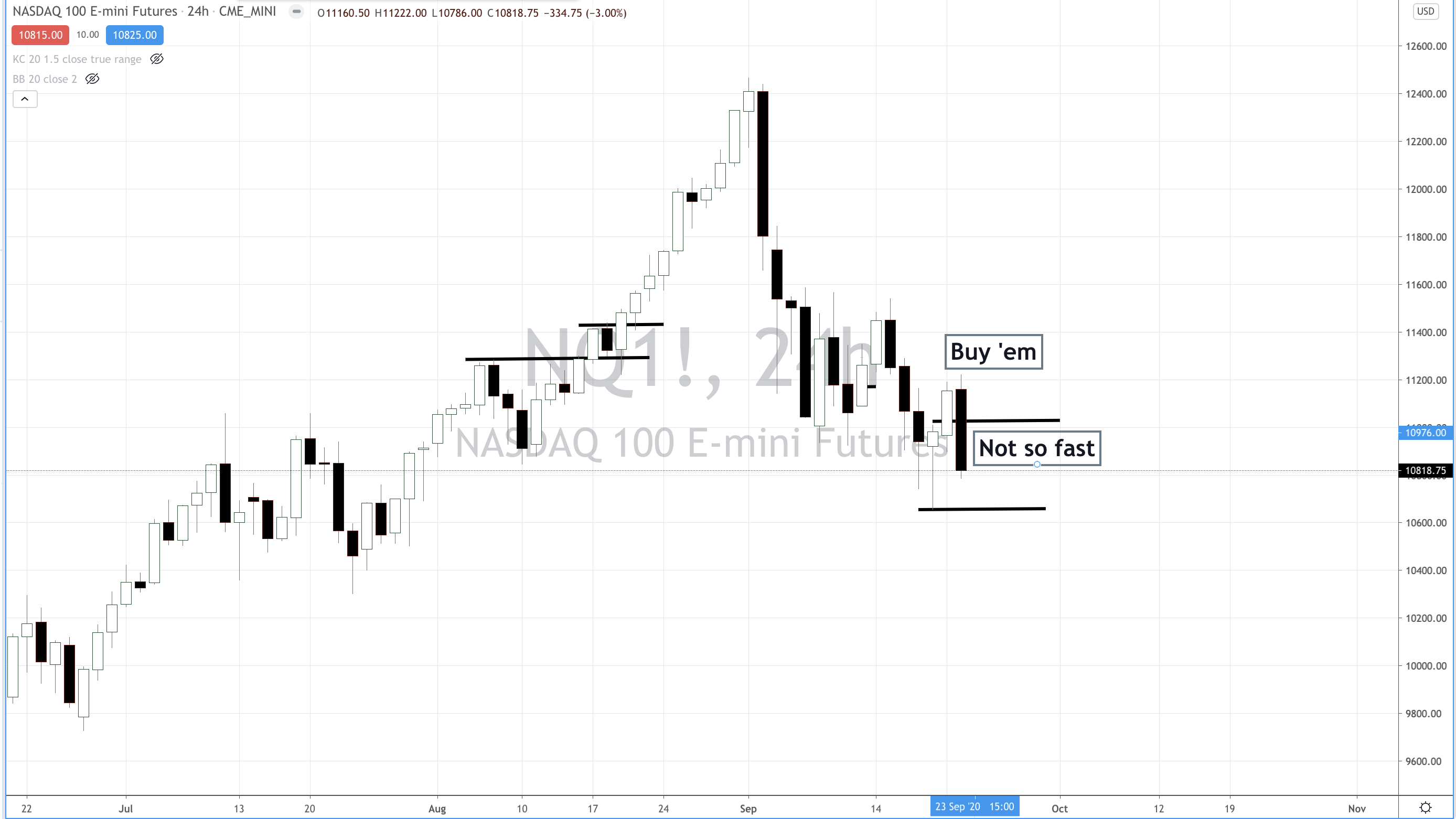 After the obvious buy setup Monday/Tuesday, Wednesday showed up ready to party...for a minute.

Then we were met by pretty pervasive selling all day long today.

This doesn't completely negate the long setup, but much like I always say about bull markets, when the worlds best sell setups fail completely we are smack dab in the middle of a bull market and I will go ahead and find any excuse to be long.

If the best buy setups in the world fail, then that is the market telling me that we aren't in a bull market. Again the setup hasn't completely failed, but the only way todays bear bar becomes bullish is if we reverse and close above todays candle's high, negating this.

Bears will have been emboldened today and if their sell setup fails they will have to cover (buying) and add some fuel higher.

If I haven't confused you enough yet, go ahead and edit your mind to see the $NQ as confused right now.

Today in the lab we took the $NG Natural Gas FVBO long for a fantastic winner, I got a nice +1.4R out of the trade but it actually ended the day up +4R for some of the traders in the Trading Lab. 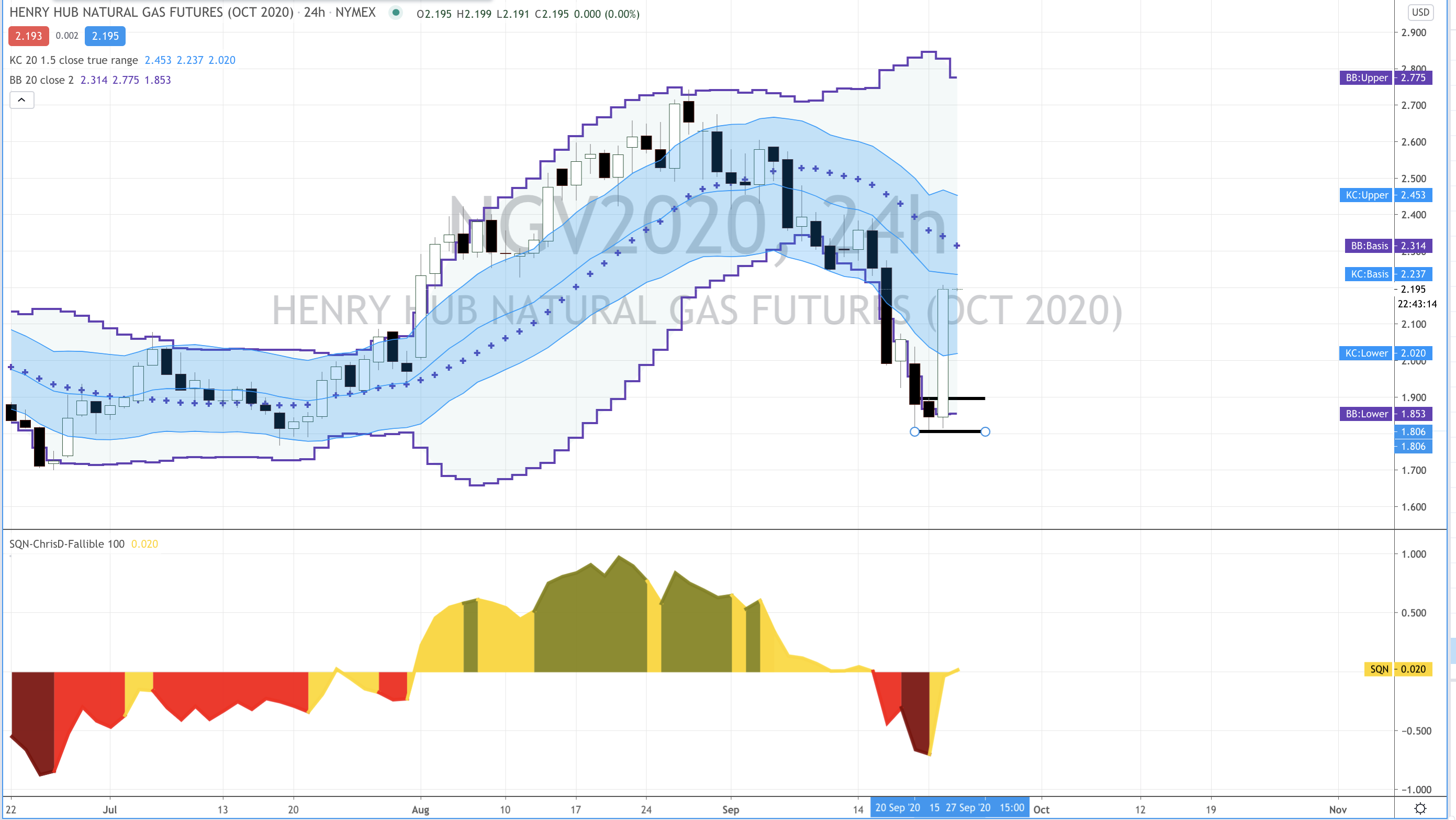 We are also keeping a close eye on Gold and Silver. 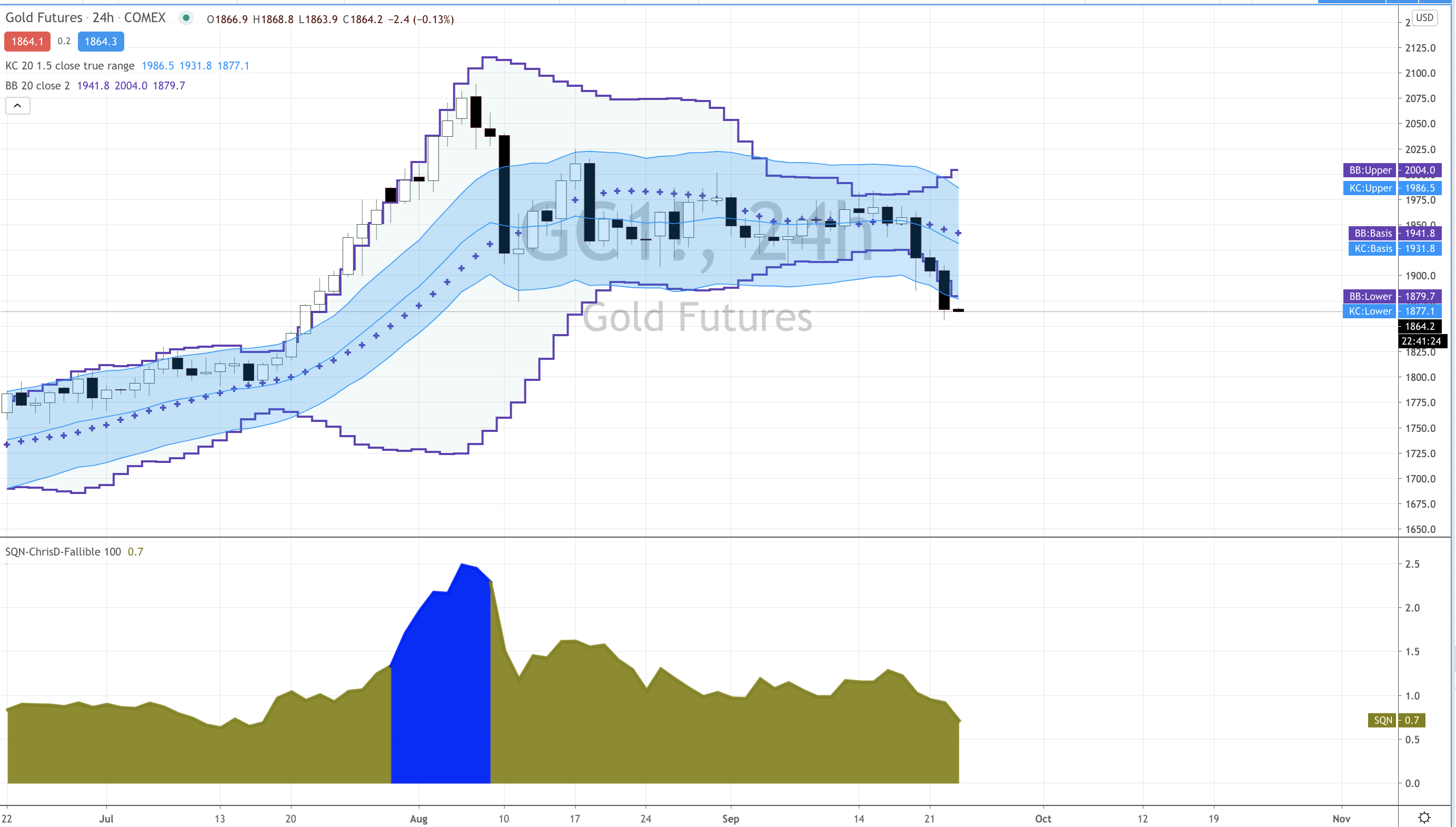 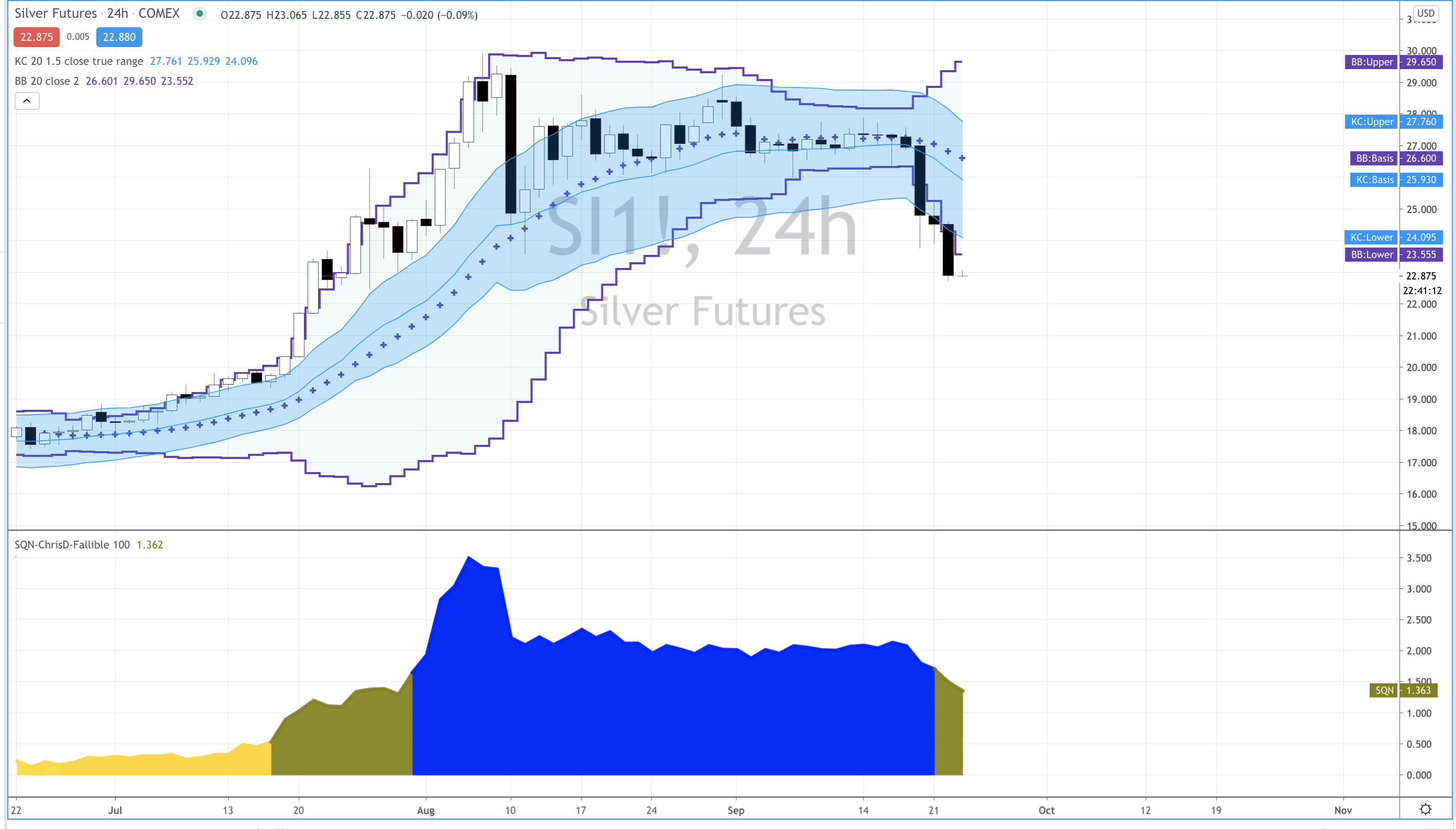 While I'm on the subject of the Trading Lab, I have a few updates...

We've recently brought on a developer for the Lab members that want help in coding up their strategies. Abhay Jain has already gotten to work on a couple of strategies for members.

Grant and Kyle have been working on some various iterations of their own strategy called the "Gun Ship", which they've shared with other members on our bi-weekly live streams. This is an intraday trending strategy for Forex markets that is pretty powerful and reliable. Abhay will be helping them to automate it!

And as I mentioned on Twitter today, we are putting a couple of long term multi-year trades that some other members in the Lab are helping me structure through options. https://twitter.com/ChrisDMacro/status/1308795855722299392

It's pretty amazing the way everyone is working together to help the entire group improve. We'd love to have you join us!

I'm not going to lie, the current environment, for all asset classes is frustrating to me. Not as a trader, that parts easy, that I can do in my sleep.

When I take a step back and have a look at the Monthly charts on Currencies, the more I look at it, the more I realize we are on cusp of some major changes.

To be clear, horizontal lines are far superior than trend lines in trading, as they are far less subjective. Let that little thought absorb deeply into your mind and you will find yourself aware of how little use these trend line drawers actually add to the discussion.

Below is a HORIZONTAL line on the $DXY (US Dollar Index). At first glance I was pretty impressed with how balanced currencies currently are. Then I came back a few days later to have a look, a week later, and just kept focusing on it. What I was missing was, yes, we are "balanced" here, but a different way to look at it is, this area we are at right now is where major changes have happened historically.

I mean changes to monetary and fiscal policy. Strong dollar policy/Weak dollar policy is what I'm referring to.

As we loom on the CARES 2 act, Covid19 and the 2020 Election, it seems appropriate that we are sitting right here at the ~$90 level.

It's clear that monetary policy has gotten us this far it's now fiscals turn to either become strong or weak from here.

The $DXY chart gives a good picture of the exchange price of the USD but it doesn't represent the most important part of what dollars mean to us.

Here's a chart of CPI -Purchasing Power of the Consumer Dollar in U.S. City Average from 1992 to today. (I chose 1992 because that's when I graduated high school and officially started earning).

Every dollar I earned is now worth nearly 50% in buying power. You can guess what this would look like going back over 100 years. Not to worry, I did that for you, so you don't have to guess.

I doubt anyone is shocked here, but it's an important point that I want to drive home. Effectively this is what a tax on savers looks like.

You may think you are being smart having your money in cash so you don't risk losing your money, but this is what is happening to your buying power when you save.

Back to my 1992 time frame, when I could have bought a home as an 18 year old adult. The value of that home nearly 3x'ed while the buying power of the money I would've saved was cut in 1/2

Again, back to 1992, when I could've started investing in the stock market as an adult. The value of my portfolio would've 9x'ed while the buying power of the money would've saved again, was cut in 1/2

My point here is, you can choose literally any other asset than cash or treasuries and you'd at least have saved your buying power for that rainy day.

For me and my family we are currently focused on owning a portfolio of equities via my Macro Rotation Fund, Residential Real Estate, Gold and Bitcoin with a large overweight emphasis in Bitcoin.