One of the big narratives sloshing around the markets these days is about the breadth of the equities markets. One comment I hear lately is that the S&P 500 ($SPX/$SPX/$ES) is trading at all time highs while only 25% of the underlying tickers are above their 200 day moving average, or something similar.

We hear about valuations compared to historical levels.

We hear about inflation being too high.

We hear about the new Omicron variant.

We hear about debt ceilings.

All the headlines we would want to hear to stack on to any bearish narrative we should spout at holiday cocktail parties this year.

No one wants to be the most bullish person at the absolute market top, so it's a safer stance to take, because you will eventually be able to point back to a time when you were cautious while everyone was over optimistic, and you were right and they were wrong!

It's very easy to get caught up in narratives, especially bearish narratives because most people have a hard time thinking optimistically for too long, they are always waiting for the next "shoe to drop, for the next "black swan".

In reality they are playing the wrong game.

They are playing the "I need to be more clever" game, the "I'm smarter than everyone else" game.

But what is the game that we should be playing here is the, "let's make money" game.

The indices $NQ and $ES have been down right manic depressive for the past few weeks, with $ES closing up near all time highs this past Friday, while $NQ (the big daddy leader) looking cautiously optimistic.

And that has everyone shook, going in to a big FOMC week.

First up is the $ES, up near its all time highs, and closing on its daily highs with some big powerful moves. The single down day last week week was lackluster in comparison to how bullish the up days were. That's price action telling the story, not indicators, not news feeds, nothing but price action. 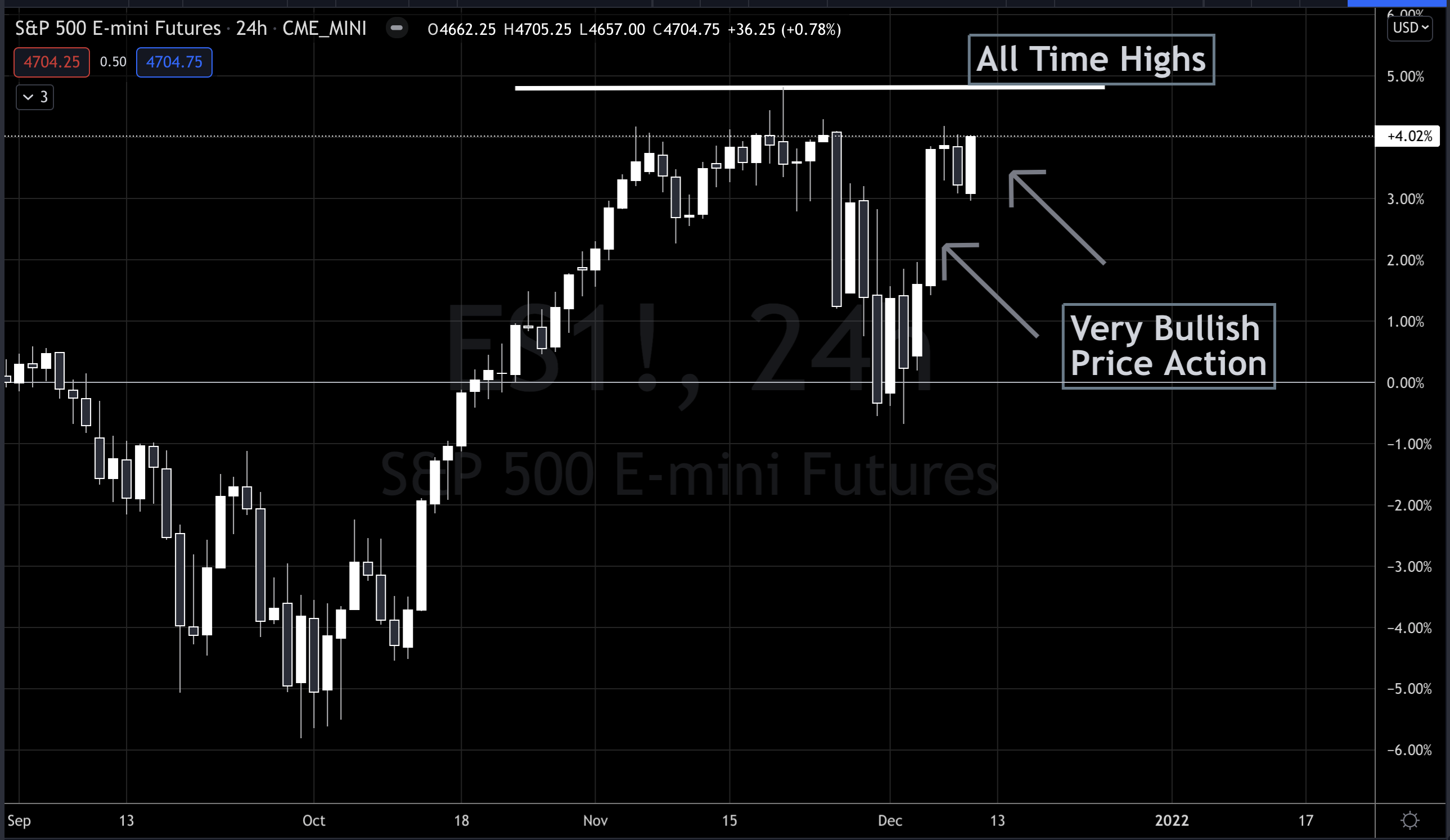 Compare that to the undisputed market leader, $NQ. Further away from its all time highs, but the price action is telling us a bullish story. 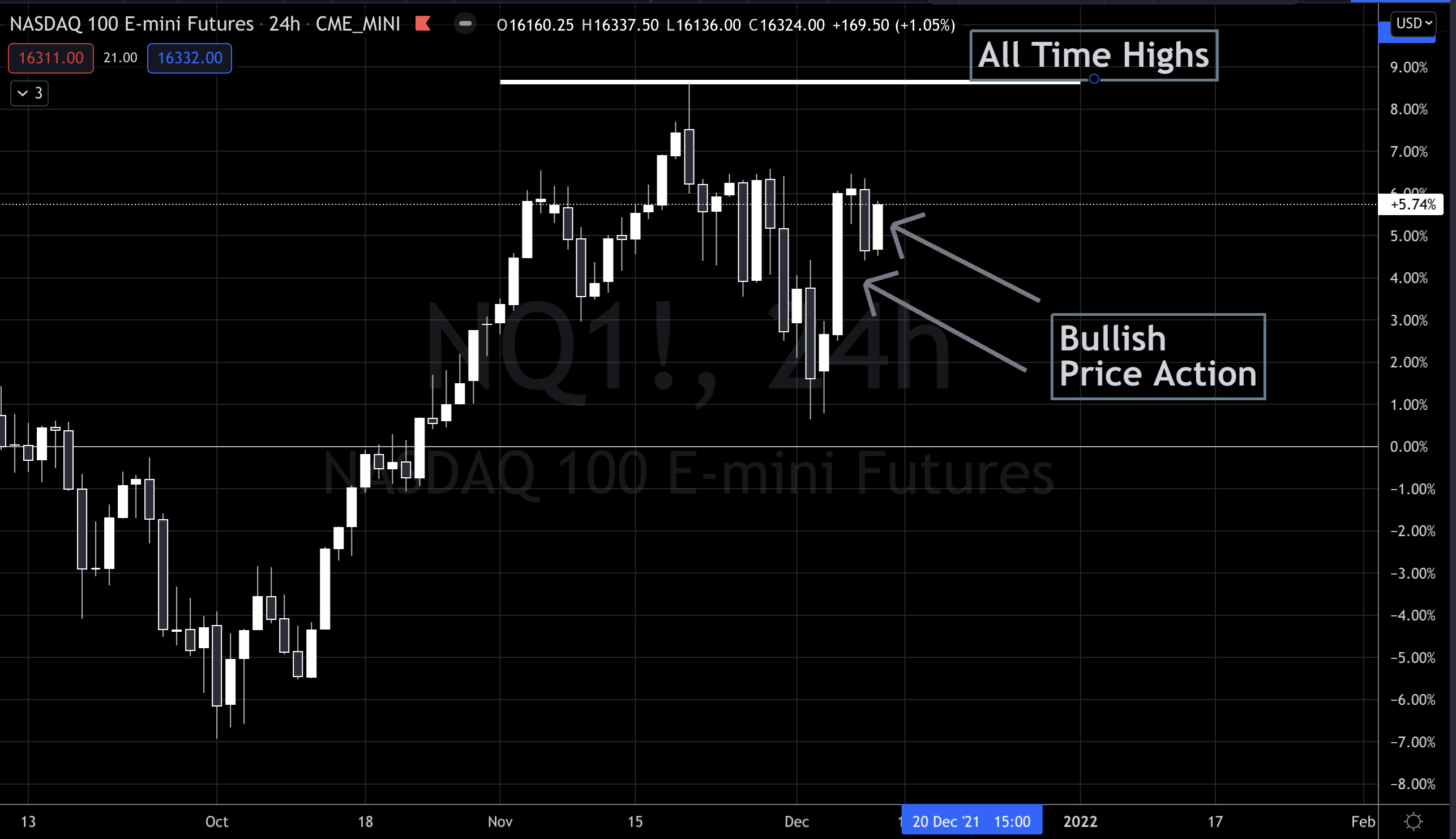 If we compare them against each other last week, it's actually a very similar story. The divergence isn't really there. The $NQ is still relatively stronger than $ES. 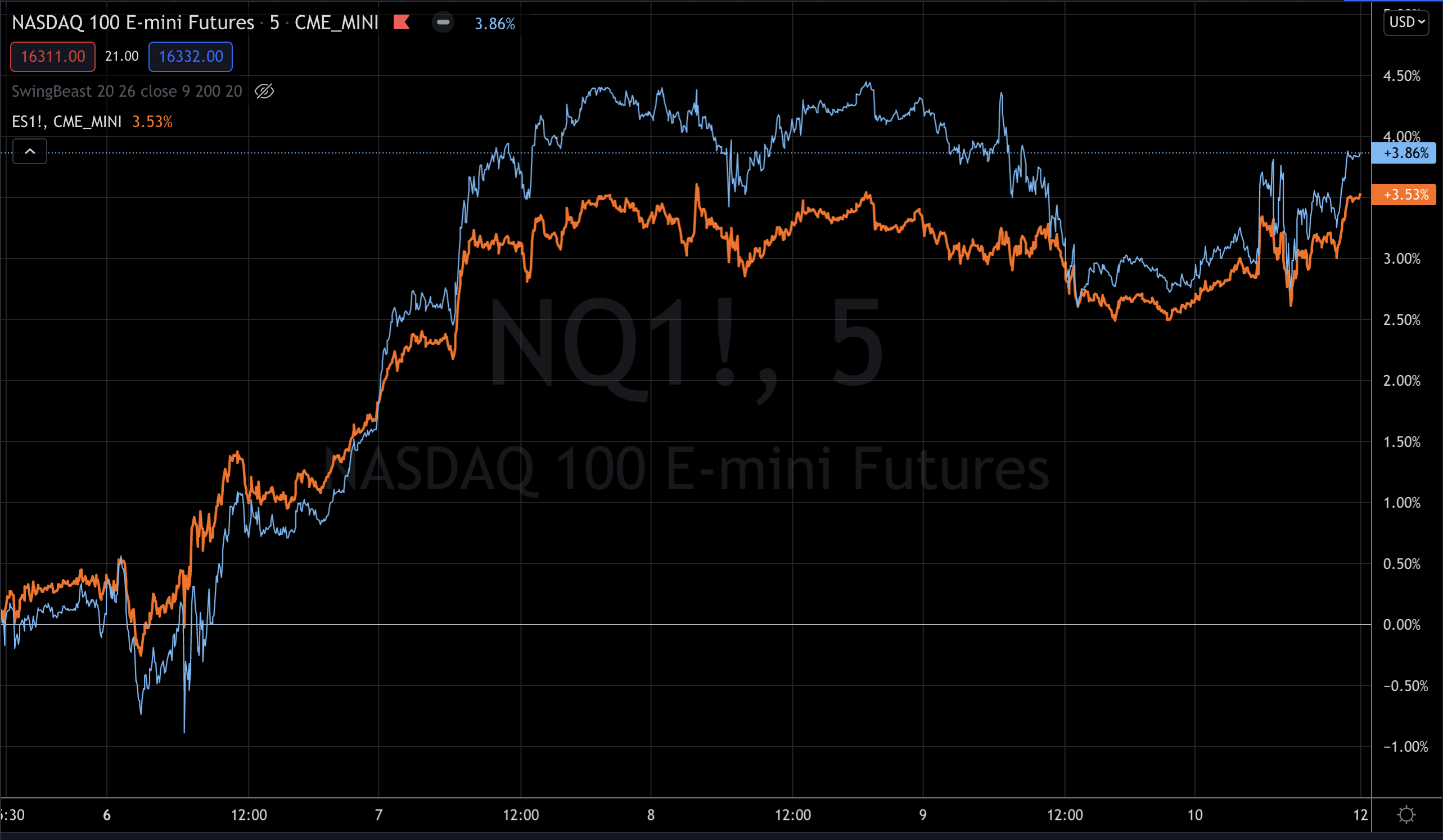 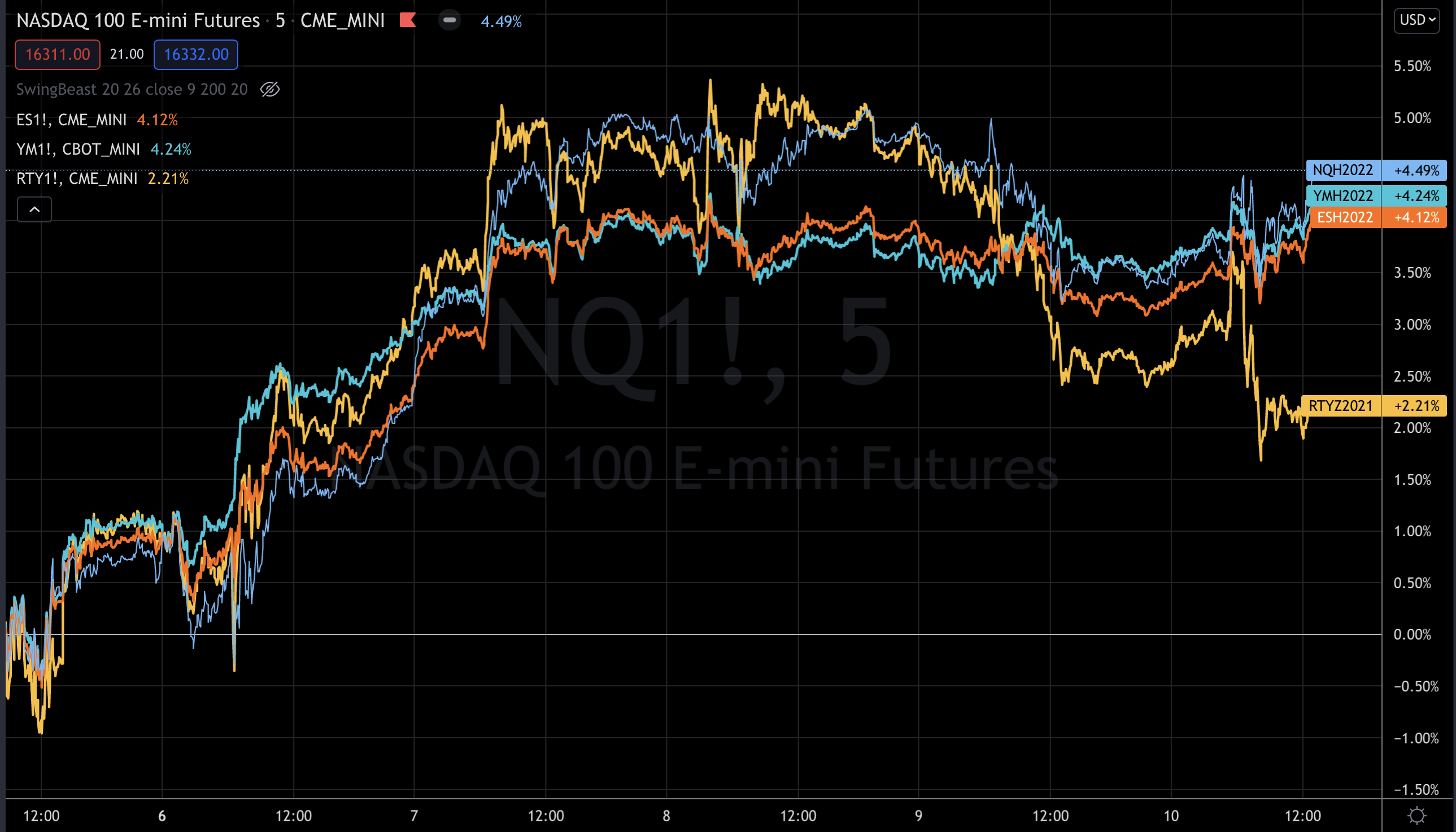 How do you get a rally? You get people scared, hedged, or taking profits, thinking that they are stepping away from risk.

Which means they'll have to buy back in later, at higher prices, when it becomes obvious in hindsight. 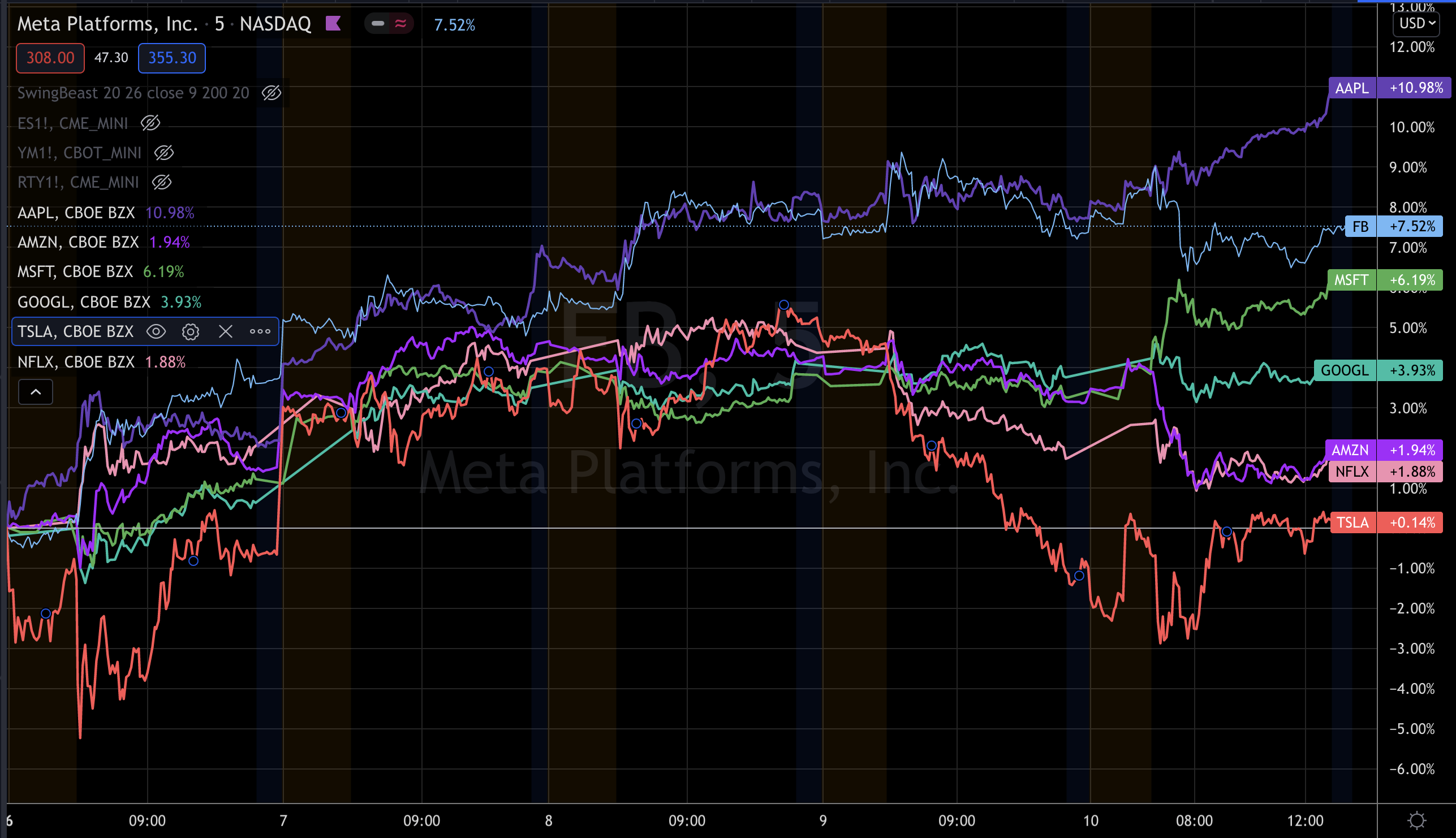 And for the last month, $AAPL has been running the show, up nearly 20% while the others were relatively weaker, and most notably $MSFT giving up a 16% lead. 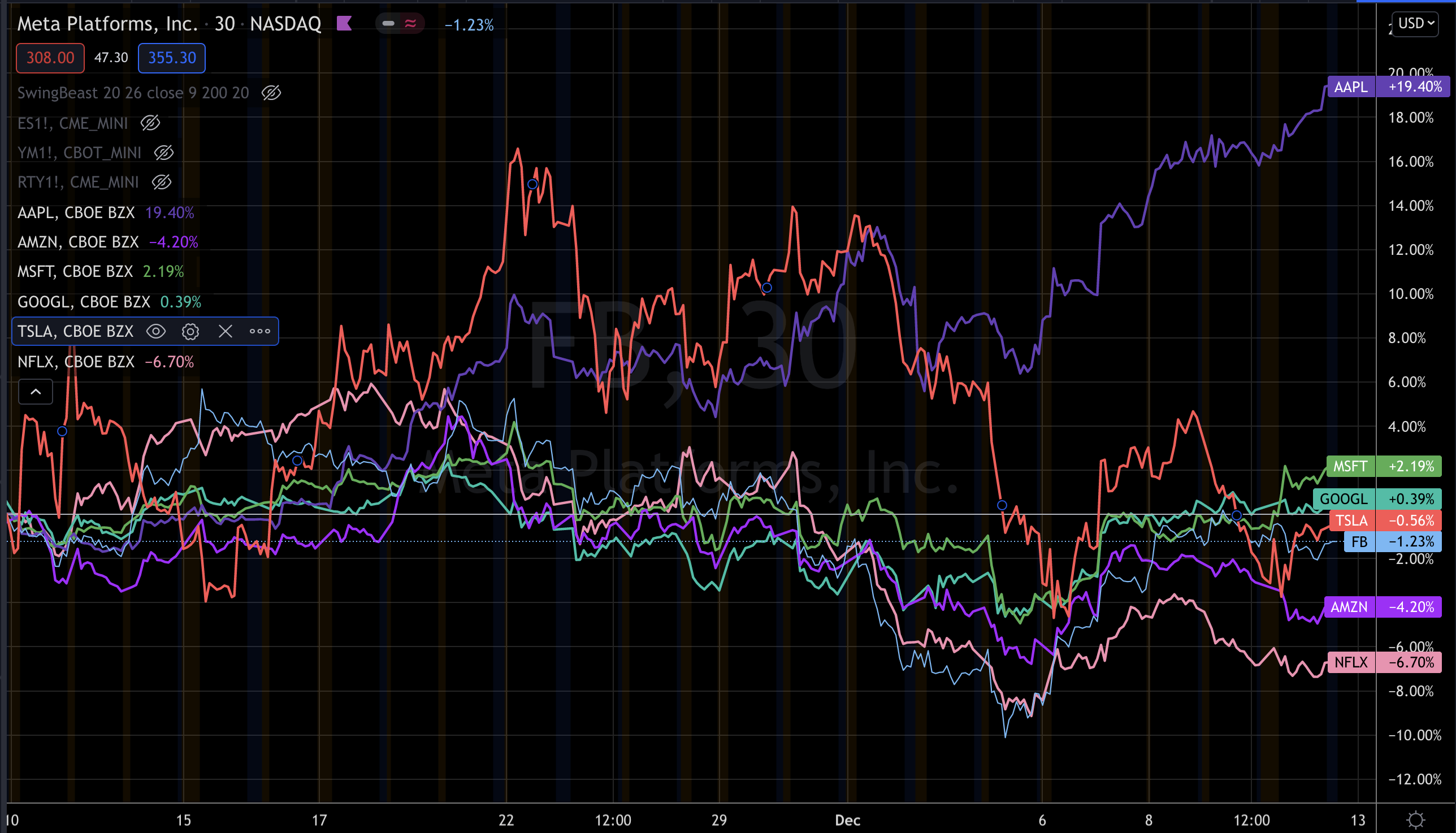 Major market tops are not formed with a whimper, and that's exactly what has been doing the past few weeks, they whimpered...until last week.

After a week that gapped up big and then mostly consolidated, after a pretty hearty selloff the weeks prior, a lot of confusion is expected, but in this market regime we know what to expect.

In this Bull Quiet market regime we expect:

But the summary is, buy weakness and buy strength.

$AAPL has been the place to be for the last month, and the Swing Beast Momentum strategy absolutely nailed that one. 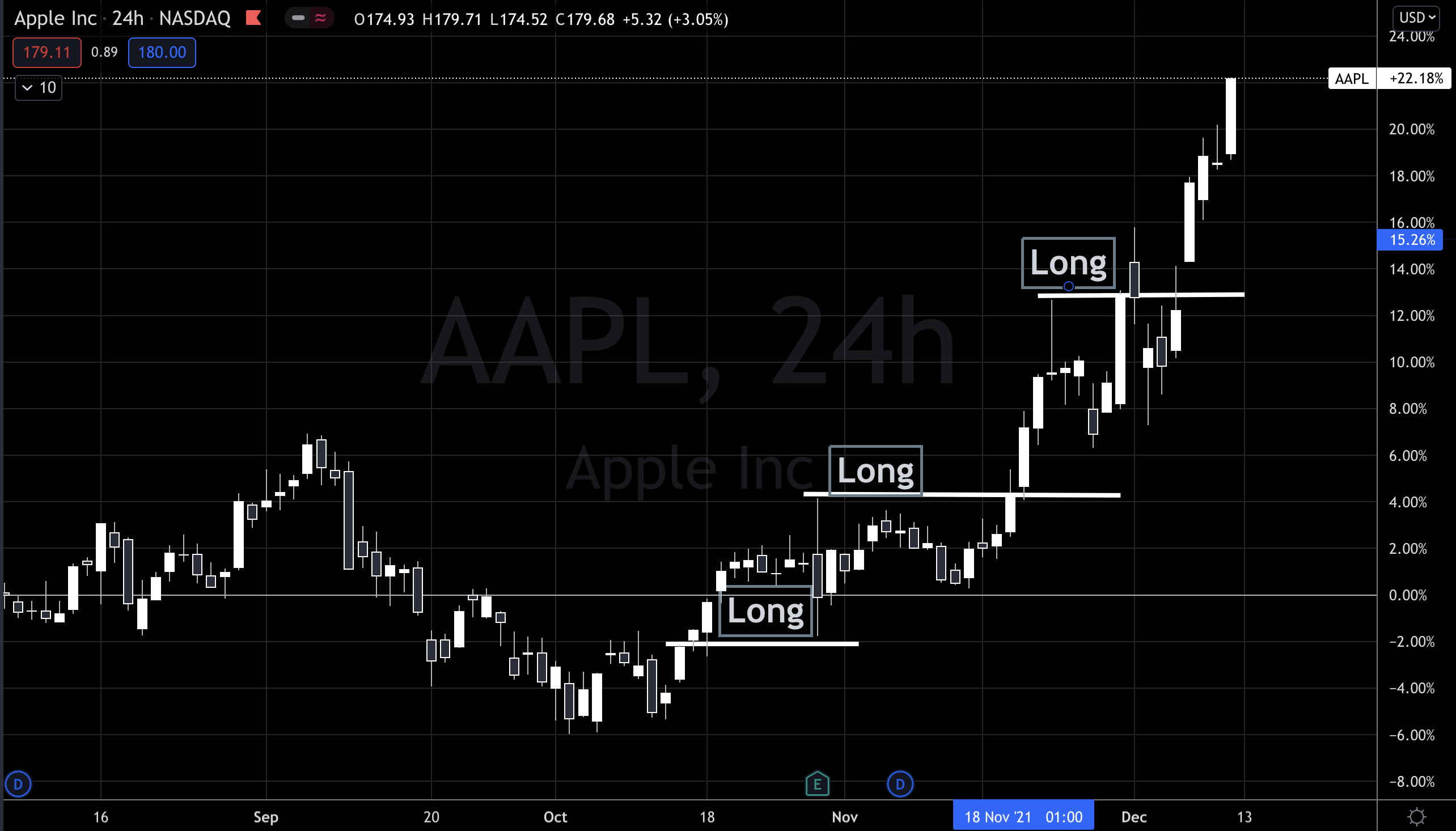 I've doubled my options account in a little over a month with the Swing Beast Strategy, and we keep improving it.

Swing beast catches all the really big moves in equities, in futures and most definitely in crypto.

The thing that makes momentum trading so powerful is most traders think that the beginning of a move is actually the end of it, that whatever is moving the underlying news is already priced in, and so most traders are usually selling in the first stages of a really big move to smarter money with longer time horizons.

Which means they, the traders, will have to buy back at higher prices, and that is simply why momentum works.

Seasonally the strongest momentum trading exists from October to May, which means we've got 6 more strong months before seasonally soft behavior.

Bull Quiet and Bull Volatile market regimes are strongest for momentum trading and we are smack dab in the earlier stages of Bull Quiet, which suggests we will have tremendous momentum opportunities for a while.

You can get access to the Swing Beast Momentum Strategy with all the rules, all the setups and continuous updates for $997, which you can recover in one trade.

If you are a Trading Lab member already or if you join the Trading Lab, the Swing Beast strategy is 1/2 off.